Taking on challenges of the time

Taking on challenges of the time 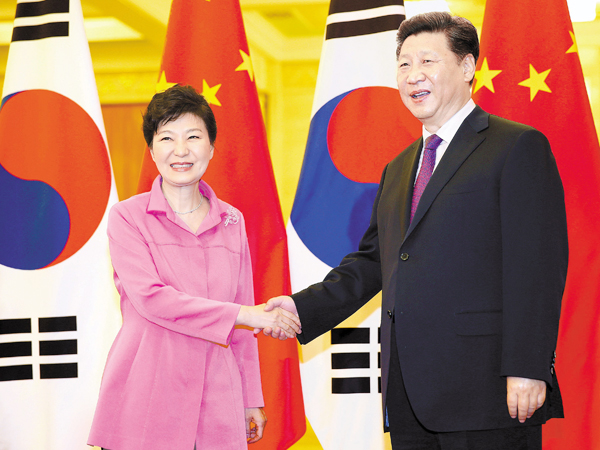 In the past half century, Korea has become an industrial nation that competes with the developed nation and a country with popular sovereignty and guaranteed liberty and equality through political democratization.

However, there are still many challenges and obstacles to leave the next generation a country we can take pride in. Economically, Korea needs to establish a flexible and efficient economic structure to respond to economic impacts from technologically advanced Japan and the second largest economy China, whose population is 30 times of Korea’s.

The economic barriers between South and North Korea must be removed for a gradual political unification. To attain this goal, we need to maintain wise diplomatic relations with the top three powers — the United States, China and Japan — and build solid defense capacities to deter military provocations from the North.

For robust diplomatic and security capacity and competitive economic structure, we need to promote social integration by resolving chronic discords among income classes, labor and management and regions. As these works would require fiscal burdens, the government must make extra efforts to keep healthy state finance.

Who will take this challenge and lead the nation for resolution?

Due to the nature of political parties that aim to seize power, politicians cannot be free from populism. Businessmen have to focus on business as they would be eliminated if they fall behind in global competition. In the end, the public servants are left with the role to support and lead.

First of all, economic officials need to take the role of reinforcing the safety net to respond to various risk factors and correct the distortion of competition order. In the course of economic development in the past half century, the older generation of officials had a sense of calling that they would be responsible for economic issues no matter what. They were not swayed by populism and were wary of temptations by the wealthy, taking on a tough job..

Today’s economic officials should continue thisl legacy. But they also need to keep in mind that they must not abuse power in the name of national development. Agencies like the National Tax Service, the Fair Trade Commission and the Financial Supervisory Service should always listen to the voices of the citizens calling for fairness and transparency.

Second, judicial officials should maintain political neutrality in accordance to the division of power and serve as the social safety net for the underprivileged and poor. If the prosecution abuse power, citizens grow anxious and become distrustful of the government.

Third, public servants, responsible for the lives and properties of the citizenry, must especially display integrity and a law-abiding spirit. Only then can we prevent situations like the Sewol ferry disaster or the outbreak of Middle East respiratory syndrome.

Fourth, local government officials must not neglect elected heads by wasting budget and administrative capacity for the next election and display courage to check them and expose such cases.

Elected officials only serve their terms, but career officials need to serve until their retirement. Promoting competent local officials to central offices or having them run for elected positions would also work. Civil servants are tenured and entitled to pension upon retirement, so it is their duty to serve the people and contribute to the nation. The public servants are the subject of reform and the leading entity for national reform at the same time. So the politicians and the citizens need to call for their changes and encourage their sense of vocation.

First, the Blue House must entrust internal promotion rights to the heads of agencies, aside from ministerial and viceministerial positions, to enhance dynamic organizational structure. If not, we cannot achieve major long-awaited reforms or innovation management at public corporations.

Second, the Prime Minister’s Office needs to reconsider the limitations on post-retirement employment and change it to a selective limitation to prevent collusion rather than comprehensive restriction. Former public servants should not be banned from working in the civilian sector, and it would also serve as a safety net to demand integrity from civil servants in office.

Third, the National Assembly needs to abandon this overbearing attitude on civil servants. To accommodate the public servants relocated to Sejong City, individual committee activities could be delegated to be handled there.

Fourth, the Board of Audit and Inspection should revamp the policy inspection function that restricts the creative operation of ministries and public agencies and focus on watching out for illegal activities and corruption.

A country prospers through changes and reform when the bureaucratic system is clean and works effectively. The future of Korea depends on this sense of duty in our public offices.

*The author is a former minister of finance and economy.

A quick fix can’t fix the taxi shortage at night

A weird discrepancy for education subsidies