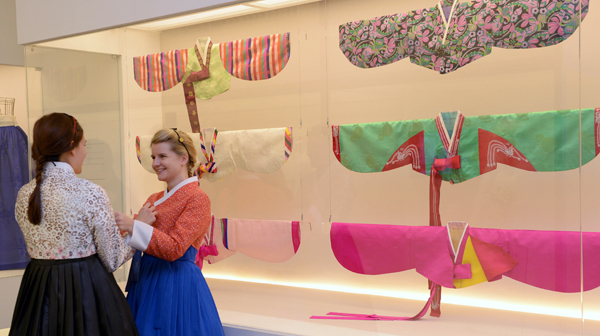 The “Hanbok, Our Beloved” exhibition, which invites visitors to observe the changing trends in Korea’s traditional clothing since the country’s liberation from Japan 70 years ago, kicked off on Tuesday at the Blue House Sarangchae in central Seoul. [NEWSIS]

Western attire has now become the everyday wear of Korean people, and it is difficult to spot hanbok, or traditional Korean clothing, on the streets. These days people only wear it for special occasions - first birthdays, weddings and for some, the Chuseok (harvest festival) holiday, which falls on Sept. 27 this year.

To remind Koreans of the beauty of traditional clothing that has largely vanished from wardrobes prior to the upcoming national holiday, and to mark the 70th anniversary of Korea’s liberation from Japanese colonial rule, the Hanbok Advancement Center, an affiliate of the Korea Craft and Design Foundation (KCDF), kicked off a special exhibition titled “Hanbok, Our Beloved” on Tuesday at the Blue House Sarangchae, the visitor center for the presidential residence in central Seoul. The exhibition runs until Nov. 1.

“Through looking at the use of different fabrics, materials and patterns, I believe visitors to the exhibition will be able to witness the flow of the cultural and social trends in hanbok for the past 70 years since Korea’s liberation,” said Choi Jeong-cheol, director of the KCDF. “Many people comment on hanbok, saying it is beautiful or it is too uncomfortable as everyday wear, so the Hanbok Advancement Center has been making efforts to think of ways to promote our beautiful traditional costume and bring it back into our daily lives.”

Although Sarangchae’s Special Exhibition Hall is quite small, the Hanbok Advancement Center decided to display nearly 90 different hanbok for the exhibition, saying that they “show the changes and trends in hanbok in the past 70 years since Korea’s liberation.” 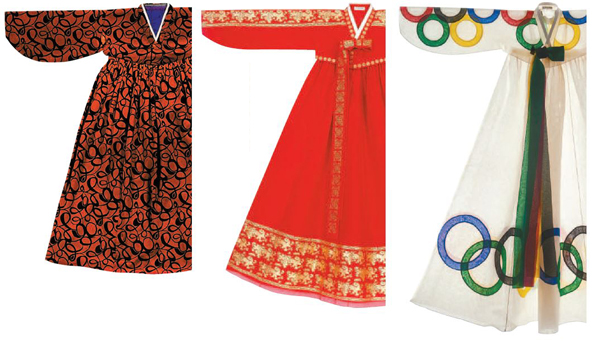 From left: Hanbok (traditional Korean clothing) made of velvet became a hit during the 1950s and ’60s due to the Korean film “Madame Freedom” (1956), in which the main actress appears in a velvet hanbok./ This bright red hanbok was worn by Miss Korea Kim Seong-heui during the 1977 Miss Universe beauty pageant. It won the Best National Costume Award that year./ The “88 Seoul Olympic Hanbok” bearing the five Olympic rings on a pure white background to represent the Korean people - the so-called “white clad folk.” Provided by the organizer

The exhibition is divided into six sections. It starts with a display of three hanbok worn by President Park Geun-hye: the bright red hanbok with gold embroidery on the goreum, or the front ribbon, that she wore during her inauguration dinner; a hanbok with a flower print jeogori (upper garment) and green skirt that she wore for the official dinner celebrating the 60th anniversary of the Korea-U.S. alliance; and finally the yellow and dark purple hanbok she wore for the ceremony to mark the restoration of Sungnyemun, Korea’s National Treasure No. 1.

“For important events in and outside the country, President Park often wears hanbok,” said Seo Bong-ha, artistic director of the exhibition. “By being seen wearing hanbok on such important occasions, she has contributed in disseminating the beauty of our traditional clothing.”

Other garments worn by famous people are also on display, such as the fur vest former President Syngman Rhee wore over the top of his hanbok during winter and flower-print hanbok worn by his wife, Francesca Donna Rhee. There is also a bright red hanbok worn by Miss Korea Kim Seong-heui during the 1977 Miss Universe beauty pageant that won the Best National Costume Award.

Other unique hanbok can be spotted at the exhibition including the “88 Seoul Olympic Hanbok,” which features the five-colored Olympic rings on a pure white jeogori and chima (skirt) to represent the Korean people, once called the “white-clad folk” for their typically white hanbok.

After the Korean War, nylon, a novel material, was introduced to bring about a new wave of changes in the style of dress, according to Seo. Moreover, in the 1960s expensive fabrics that could previously only be imported from Japan and China, such as brocade and velvet, began to be manufactured in Korea. 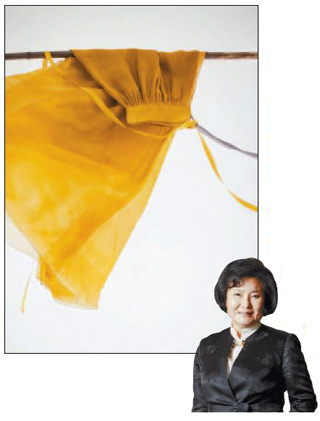 Renowned fashion designer Lee Young-hee will present a panorama of 40 years of her designs, including her signature style of chima (skirt) without jeogori (upper garment). [JoongAng Ilbo]

These developments brought about great changes in hanbok fashions. From a see-through lace jeogori to a velvet chima, the exhibits show the growing diversity in hanbok. In the Korean Wave section, the hanbok worn by characters in the drama series “The Moon Embracing the Sun” and “My Love from the Star” are also on display.

At the end of the exhibit, visitors can see the latest modern hanbok from contemporary fashion designers in an effort to popularize the garb.

“Recently, I see many young Koreans walking around in hanbok with a very modernized design,” said Seo. “I personally think it is a very good sign, and I thank fashion designers for designing such comfortable hanbok. I mean, even I who love hanbok wouldn’t want to walk around wearing the old-style hanbok that can be quite uncomfortable for everyday wear. I hope people get encouraged to wear such hanbok after visiting the exhibition.”

Another exhibition is being prepared to promote modernized hanbok, trying to show the universal beauty that can be witnessed in contemporary designs as well as traditional styles. Lee Young-hee, one of the most celebrated hanbok designers, is presenting a panorama of her 40 years of hanbok designs at Dongdaemun Design Plaza from Sept. 23 to Oct. 9. Since her debut at a Paris fashion show in 1993, Lee has established herself as Korea’s pioneering traditional-style dress designer, organizing more than 400 overseas fashion shows.

Lee has been designing new styles of hanbok that are simple yet fashionable for today’s consumers. She often has said that in order to bring hanbok into the modern era, it is necessary to get rid of excessive decorations. Therefore, she removed the goreum from the jeogori.

She even did away with the jeogori for some designs, sending models down the runway in only colorful hanbok chima starting with her 1994 Paris collection. Some traditional hanbok designers criticized her pieces saying they are not hanbok as they do not have the same silhouette, but such has been her approach to modernizing the garb. Conversely, many have praised her work, calling it the “clothing of the wind.”

Her show, “Lee Young-hee Exhibition - Wind, Hope,” will be an opportunity to witness what kind of hanbok fashion Lee has been pursuing for the past 40 years while resolving any misunderstandings about hanbok without jeogori, according to the organizer. Models will appear wearing one of Lee’s designs each day at 2 and 4 p.m. For more information, visit www.leeyounghee.co.kr.