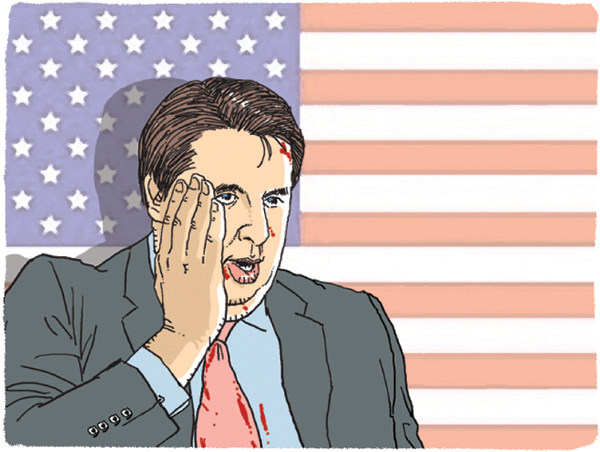 We don’t get much Korean news here in England. When we do, it’s almost always something bad or crazy involving North Korea, like last month’s border tensions — now thankfully eased.

What makes that story global news, not just local? The shocking photos at the time must be one reason. No one will forget those bloody images — and Lippert’s cool courage. President Park Geun-hye showed the same admirable sang-froid when she was slashed in an eerily parallel attack in 2006.

Park’s assailant had no political motive. Not so Kim Ki-jong. A known extreme nationalist, guilty before of hurling concrete slabs at the Japanese ambassador, Kim shouted his motives even as he stabbed. The annual joint ROK-U.S. military exercises Key Resolve and Foal Eagle, which had just begun, are in his eyes an obstacle to better relations between the two Koreas.

Kim is entitled to his views, but not violence. South Korea is a democracy where points can be made peacefully. Kim’s way is the law of the jungle. According to this newspaper, he told the police that South Korea is a semi-colony of the United States whereas North Korea is independent and self-reliant.

After the attack, we saw pro-U.S. rallies — by conservatives. Efforts were made to paint Kim as a solitary extremist, totally unrepresentative of wider South Korean opinion towards the United States. Is that true? Coincidentally, the day Kim was jailed I was sent a new book by David Straub: now at Stanford, and previously one of the State Department’s leading Korea specialists. His 30-year diplomatic career included two tours in Seoul, in 1979- 82 and 1999-2002. The latter forms the subject of his book, titled: “Anti-Americanism in Democratizing South Korea.”

This must have been painful to write, and to live. Straub likes Korea. He married a Korean, so Korea is family; hence he had looked forward to his second tour. The last thing he expected was to spend so much time fire-fighting, fending off one anti-U.S. outburst after another.

They came thick and fast back then. Successive chapters cover the Nogeun-ri massacre and its re-evaluation; Agent Orange and formaldehyde; the Koon-ni (Maehyang-ri) range issue; the Apolo Ohno skating row; and divergent North Korea policies (in a neat phrase, he says Kim Dae-jung was “Bushwhacked”). All this climaxed in the tragic deaths of two girls crushed by a United States Forces Korea vehicle in Yangju, prompting angry demonstrations and arguably swaying voters to narrowly elect as president Roh Moo-hyun, who said he would not “kowtow” to the United States.

Over a decade on, those names still stir vivid memories. Most of them were complex; all were highly contentious. Straub covers each incident with meticulous thoroughness. At the time his job as a diplomat was to be in the United States’ corner. Some Korean readers may feel he is still doing that, but I disagree. He is honest about when the United States is at fault, including the failure to take on broad Korean concerns and sensitivities.

Each of the half-dozen topics he covers is different, with its own nuances. Yet overall a single picture emerges, and it isn’t pretty. Straub’s charge, which he documents and illustrates fully, is that time and again South Korean media — conservative and liberal alike — simply
didn’t report facts or issues accurately or with any balance. Instead the presumption was that the mighty United States must be at fault, with Korea always portrayed as the injured innocent.

As an Anglo-Irishman who loves Korea and likes America, hopefully I am unbiased. But my own impression is similar. Take a more recent case, which Straub cites briefly: the 2008 “mad cow” protests. Those were totally over the top. Fact: U.S. beef was and is safe. So why did so many Koreans, as the young say, go off on one about this?

Let’s be careful not to over-generalize. Sentences like “Americans are X” or “Koreans are Y” are part of the problem. Yet countries often have distinctive attitudes, slow to change. Anthropologists call this “cultural lag.” A prime example is Korea’s “shrimp among whales” self-image, oddly persistent even today when South Korea is no shrimp but a lithe dolphin.

As the title of Straub’s book suggests, another reason for the turn of the century explosion of anti-Americanism was democracy. After four decades of right-wing dictators imposing a monolithic anti-Communist narrative, where even questioning the U.S.-Korea alliance was dangerous if not treasonable, heady freedom made it natural for some to go the other extreme. A sense that it was high time South Korea stood up to America briefly became the national mood.

On some aspects, especially issues involving United States forces, a comparative perspective may help. However grateful you are to an ally, foreign soldiers are always a source of friction. When the United States finally joined World War II, its troops were welcomed but resented in the austere wartime United Kingdom for flashing their cash — which helped them in the dating stakes. Our grumble about
Americans then was that they were “Overpaid, over-sexed and over here.”

That quip has a grudging humor. Koreans laugh at much else, but national pride is no joke. In my experience an underlying ambivalence toward the United States is quite common. Travelling around South Korea in 1982, I swiftly learned to say in Korean that I was British, not
American. Not a few Koreans were definitely friendlier once they knew I was not American.

That was then, but what of today? Was 1999-2002 an exceptional episode? Straub finds South Korean attitudes now to be largely pro-American. His book went to press before Ambassador Lippert’s ordeal. One single incident, however shocking, should not be given undue weight.

But let’s not be complacent. A sour well of anti-U.S. animus still bubbles here and there, wider and deeper than one would wish.

Take the artist Hong Sung-dam, whose implicitly approving picture of the attack on Lippert hung in the Seoul Museum of Art until its recent removal. As reported, the rather crude work includes a long rambling text in which Hong blames the United States for most of South Korea’s political woes, adding: “I have felt despair about these problems for a long time. However, I’ve kept my mouth shut about the despair. On the other hand, Kim Ki-jong expressed it with a knife, though it was only a fruit knife.”

Only a fruit knife! Only a nutcase could say that. Lippert nearly died: an inch more would have killed him. We could argue for a long time the rights and wrongs of U.S. policy in Korea since 1945. But democrats use reason and abhor violence. Wield words, not knives.

*The author is an honorary senior research fellow in sociology and modern Korea at Leeds University in the United Kingdom.