Continue with past initiatives

Continue with past initiatives 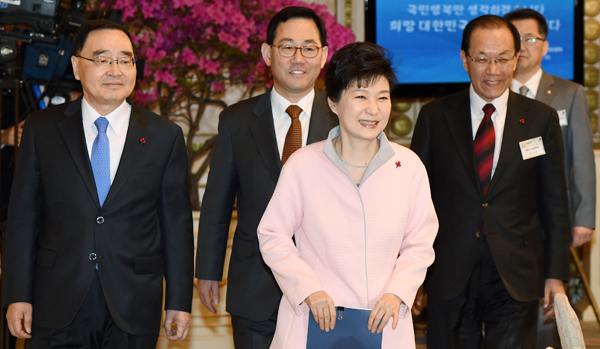 Some things just don’t change. They didn’t fail to yell and insult. They would call a witness to ask all the irrelevant questions, and they would just leave if they were not pleased. This is what’s happening at the National Assembly’s inspection of government offices. We’ve all seen the mess, but it is beyond deplorable. When they were elected, they must have had some vision to work for the nation.

And the criticism is always directed toward the president as the head of state. President Park Geunhye promised “happiness for the people” in the 2012 presidential election campaign. She proposed 10 campaign promises, including lower education expenses and new jobs through the creative economy. But considering what the president and the government are doing, they are not so reliable.

Since September 2014, conglomerates have been doing promotional campaigns. First were the 17 Creative Economy and Innovation Centers set up across the nation. Recently, the second round began when they announced plans to add a certain number of new jobs by certain dates. We all know new jobs cannot be “created,” yet they are going forward with empty promises.

Civil servants and lawmakers cannot ignore the sweet temptation of short-term outcomes. But President Park should know better. She had lived at the Blue House twice, but she won’t have a third chance. In other words, she has no reason to hold back. She could pursue her policy promises, leaving no regrets. She needs to address the decades-old problems and the challenges to come. None of the chronic
problems, including education, welfare and employment, can be resolved at once. A road map should be drawn up, and things that can’t be done this term should be defined for the next administration.

In that context, President Park needs to continue the Lee Myung-bak administration’s resources diplomacy and green growth policies. While there were a few serious mistakes, the direction was not wrong. International energy prices are very low now, and it is a good opportunity for resources diplomacy and green growth. The Roh Moo-hyun administration’s balanced regional development policy also needs to be continued. This is one way to keep the creative economy on the to-do list of the next administration. The creative economy
is too important to abandon after the Park administration.