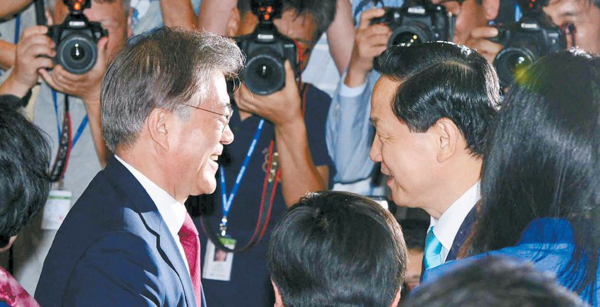 Moon Jae-in, left, chairman of the main opposition New Politics Alliance for Democracy (NPAD), greets Kim Sang-kon, chairman of the NPAD’s reform committee, on Wednesday after their nomination reform plan was approved by a central committee meeting held at the National Assembly in western Seoul.[NEWSIS]

Moon Jae-in, chairman of the opposition New Politics Alliance for Democracy (NPAD), held onto his job on Wednesday as his changes to how
the party nominates candidates were approved.

Moon previously vowed to step down if the party’s central committee rejected a set of nomination proposals drawn up by a reform committee.

The central committee of the NPAD convened a meeting at the National Assembly on Wednesday and unanimously passed the changes to the party’s nomination system.

Of the total 576 members of the central committee, some 400 members, including Seoul Mayor Park Won-soon and South Chungcheong Governor An Hee-jung, appeared for the meeting.

Moon met with reporters after the meeting and said, “Reform begins now, and we will pursue fundamental changes of not just the system but the characteristics of the party.

“I deeply appreciate central committee members for agreeing to the plan by giving up their vested rights,” Moon continued. “We will put our every effort into becoming the ruling party in the next general election.”

But internal strife between the party mainstream, which is the pro-Roh Moo-hyun faction led by Moon, and non-mainstream party lawmakers, including Ahn Cheol-soo, a first-term lawmaker and software tycoon, is expected to only get worse.

In the opposition party, lawmakers outside the pro-Roh faction have claimed the reform proposals are designed to favor mainstream members and solidify Moon’s power.

Under the new nomination system, which was drawn up by the NPAD’s reform committee, the opposition party will introduce a public panel of 300 to 1,000 people for each constituency to select the NPAD candidate.

The NPAD will create the panels in advance by receiving applications from the public. Political rookies, women and disabled candidates are given extra points.

The reforms are widely seen as favoring new faces hoping to go into politics and are disadvantageous to party veterans - many of whom are from outside the pro-Roh faction.

Ahn, who demanded the meeting be delayed, did not show up on Wednesday. “I could have attended the meeting and given my opinion against the plan if Moon did not stake his position on the approval of the reform plan,” Ahn said. “But the meeting became an event to decide whether Moon resigns or not.”

Other non-mainstream members called for a secret ballot and walked out of the meeting after their request was rejected. They released a joint statement questioning the central committee’s decision.

“First, four out of seven supreme committee members opposed submitting the bill to the executive committee of the party, but Chairman Moon unilaterally filed it.

“If the bill was actually a vote of confidence for the chairman, it is like forcing members to vote for the plan,” it continued. “It is also undemocratic that they did not properly count the votes and neglected opinions of the minority.”

“The reform plan was agreed to by an absolute majority and was passed unanimously,” Moon said. “And I am obliged to accept their needs and follow the plan properly.”

“The reform plan was approved today, but it does not mean that they now have confidence in me,” Moon added. “I have said that it is desirable to conclude [the vote] before the Chuseok holiday, and I will keep discussing the issue with the party, since the whole point is the solidarity and unity of the party.”