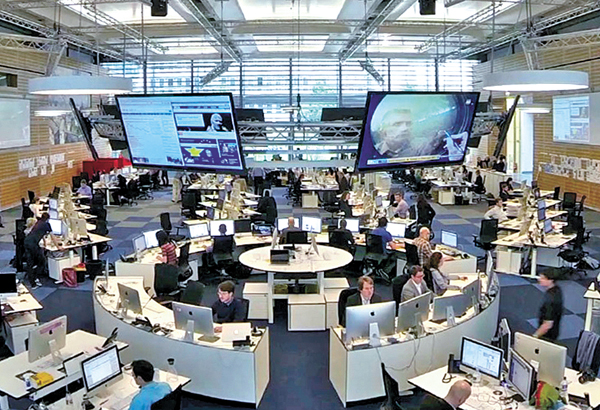 In the Die Welt newsroom in Berlin, staff writers, editors, mobile content producers and designers sit clustered together in an area known as the “eye zone.” Provided by Die Welt

The media industry is currently undergoing a transformative period in which growing importance has been placed on catering to consumers via digital platforms. What is clear is that if a media outlet wishes to survive, it must adapt to changing market trends. To mark the 50th anniversary of the establishment of the JoongAng Media Network, the JoongAng Ilbo spoke with major industry forces to learn about their trials and successes in securing new revenue sources during an era marked by technological advancement. In this three-part series, we will examine the current state of the media and its future as demand for original, quality news content rises. - Ed

BERLIN - This year, as Germany’s Die Welt celebrates its 70th anniversary, the daily newspaper finds itself placed squarely at the forefront of the digital revolution in journalism.

Its parent company, Axel Springer, one of the largest printing houses in Europe, which operates more than 450 publications across 44 countries, has been credited with successfully adapting in an increasingly competitive industry, making it a leader in an era defined by technological innovation.

And nowhere are these adaptations more evident than at Die Welt, whose high-walled newsroom boasts an area known as the “eye zone,” in which the paper’s editor-in-chief, mobile content producers and design team sit clustered together, the office’s desks situated in a radial pattern similar to the spokes of a wheel.

This section serves as the literal centerpiece in the news-making process at one of Germany’s most-read dailies, wherein its staff discusses how to produce compelling stories fit for an ever-connected readership.

The newspaper’s continuing strides toward digital innovation have been made under the guidance of Axel Springer SE CEO Mathias Dopfner, who has aggressively pursued strengthening its online and mobile content over the past decade.

The company has created and operates more than 300 mobile applications, and even engaged in a very public battle with Google in November, when the German media outlet withdrew its articles from the search engine’s web results to protest its payment policy for its news service.

Die Welt began moving toward the technological forefront in 2006, when it formed a digital team to launch mobile services. Six years later, it established an online paywall service and implemented a digital-first policy, under which all stories are uploaded online before going into print ? an effort to persuade readers to join in the technological “migration.”

Over the past decade, the newsroom’s shift from print to digital has resulted in the majority of its revenue coming in from the latter platform. In the first quarter of 2015, digital platforms accounted for 63 percent of Axel Springer’s revenue, while 73 percent of its core profits were drawn from digital platforms.

The number of readers who currently have a paid online subscription is about 66 percent of the number that pays for the newspaper, which stands at around 100,000.

Die Welt has about 300 staff writers, and all their stories are uploaded online, most of which include real-time updates, videos and infographics to boost potential interest. While all 300 cover online news, only 12 are tasked with selecting which articles make it to print.

“All stories are made for digital. The people who print the newspaper, they can pick the best stories from [online] and put them in the paper,” said Jan-Eric Peters, the editor-in-chief at Axel Springer. “But they can’t say, ‘I don’t like what the digital people did; I want to assign my own stories.’ That’s not allowed anymore.”

“The printed paper is like a printed Internet,” he added.

Regarding concerns that the company’s renewed emphasis on the digital platform may reduce overall quality, Leeor Englander, a mobile service editor, said there was no difference in news quality compared to the past. In fact, he said, the quality has actually improved thanks to the shift in focus toward online services.

“If you look at our printed newspapers, you don’t see any differences. We think it’s even better, because the amount of content and the stories we produce daily is three times as big as before. So if you have the choice of 150 or 250 or even 300 stories to pick the best stories, in the end you will have a better-quality newspaper than if you just produce about 90 stories that you need for your newspaper,” Englander said.

In 2010, Die Welt integrated its newsrooms that had previously functioned separately - such as its Sunday editions and web editions - and introduced a 24-hour work cycle run in three shifts.

To better track how online readers come and go, Die Welt analyzes their entry routes and what stories in which they are most likely engaged ? those to which they reply or recommend and share on Twitter and Facebook, a trend that was unheard of in the print age.

Consistent efforts, Peters said, should be made to tell newsroom staffers unaccustomed to a digital platform just why the company needs to adapt to a digitally oriented culture.

To this end, communication with staffers is “very important,” he said.

“You have to explain to your people what you are doing and why you are doing it so they can follow you, because it’s complicated. We have a print history. Most reporters are newspaper reporters and they had to change from print to digital. So communication is very important.”

Once there is a consensus on shifting from print to digital, the execution of tasks to transform the newsroom into a digitally friendly one should be carried out in a “radical” manner.

“It took us a long time to come here, but the most decisive thing was that we built this new newsroom because in our former newsroom the newspaper was the center of all of our work. … Here it’s completely different, because we focus on our digital offerings. So newspapers are made right here, but not in the center any more. The digital stuff, where I sit and the deputies sit, that’s where the focus is.”

In its efforts to further integrate beyond on and offline content, Axel Springer acquired news channel N24 last year. Peter added that the company plans to combine Die Welt’s newsrooms with the channel’s operations in three years to enable the company to simultaneously amalgamate breaking news coverage online and on television.

“When we have [something like the Greek debt crisis] or when that German plane crashed a couple weeks ago, we discuss who is going there, how many from TV, how many reporters [from the newspaper]. That is the way it works now.”