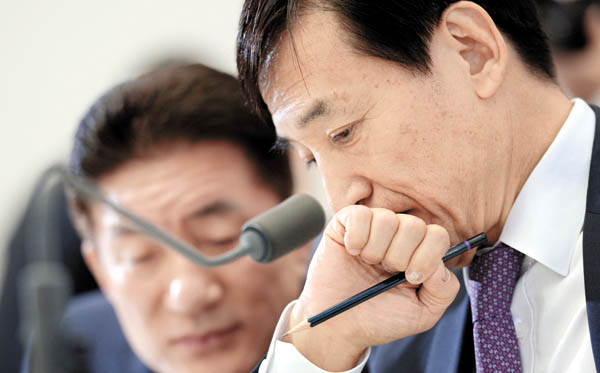 An increase in the U.S. interest rate is expected to be gradual and adjusted about four times a year, Bank of Korea Governor Lee Ju-yeol told a hearing on Thursday.

On the same day that the Federal Reserve is expected to announce its decision on a rate hike, Lee told a parliamentary audit on the central bank in Seoul, “Through communication with the U.S. Federal Reserve, what the market expects would be four times or less of rate increases in a year. The speed [of the increase] is forecast to be slowed.”

In response to a question from an opposition lawmaker, he said, “In the 2000s, the United States raised interest rates for 17 straight months, and the Fed usually sets up a long-term goal in currency policy and maintains its consistency,” Lee said. “But we cautiously assume this time could be different.”

Given the assumption, the impact from a U.S. rate increase would not be that “worrisome,” he said.

Regarding Korea’s historic low rate of 1.5 percent, Lee agreed the level is low but suggested the central bank could reduce the rate more.

“In theory, there could be a limit in lowering rates,” he said. “But we can’t see that the current level of interest rates reached that limit.”

“We should make decisions on currency policy by taking account of all financial and economic situations,” he said. “We can’t decide a specific direction in advance.”

Despite the lowest-ever rate, Lee admitted the move has not helped the economy.

“It is true [the rate cut] worked on finance but it didn’t help in boosting the real economy, including consumption and investment,” Lee said. “Due to structural factors and external risks, there was a limit [for the currency policy] to affect the real economy.”

He also said “redenomination” was a consideration. The term refers to changing the face value of the Korean won without adjusting the exchange rate.