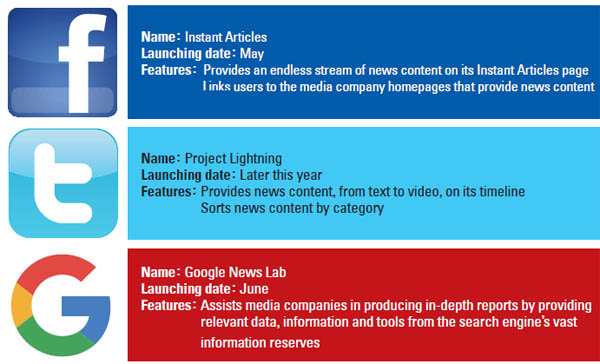 Twitter has served as a vast sea of information for journalists and will continue to play that role, according to the social media site’s co-founder and interim CEO, who took the helm of the company in July.

In an interview last month with the JoongAng Ilbo, Jack Dorsey, who also works as the top executive for the up-and-coming payment application company Square, emphasized that his company always has and always will be a vital tool for reporters and news hounds. Twitter allows them to distribute their stories, he said, while at the same time providing them with instant feedback from their audience.

At the company’s headquarters in San Francisco, Dorsey acknowledged that Twitter had faced a myriad of troubles, with a slump in the number of active users and quarterly losses that now exceed $1 million, which prompted his return this summer.

But despite growing doubts about the future of the company, the 38-year-old entrepreneur sounded confident in the role Twitter had and will have in helping journalists and the media reach their widest possible audience.

“Journalists would use Twitter to broadcast their stories, to provide an extra narrative around certain stories and to source information for their story. Twitter is a great tool for journalists to share their publishing, to get comments on what they are publishing and also to be a source for their current and future work.

Because Twitter is a communication tool, we consider that in how to advance it and how to benefit news organizations.”

As part of Twitter’s continuing efforts to tap into news resources in attracting new users, the social networking site, which had 320 million monthly active subscribers on average in the first quarter of this year, is preparing to launch by the end of this year a Lightning Service, in which Twitter users can see a timeline of events and stories happening around the globe, complete with pictures and video clips.

“By going into the app, you can see all the things happening in the world,” Dorsey said. “When you tap into one of them, it actually gives you the full context and story behind it - as well as [context] about why it’s meaningful and why it’s important. All these tweets include videos and images that are connected together, which give you a better picture of why what’s happening in the world is important.”

Aside from its plan to launch Lightning, Twitter also aims to strengthen its news service with Periscope, a live video-streaming app purchased by Twitter in March for slightly less than $100 million, which will complement news tweets with minute-by-minute video coverage.

“Periscope has just had an amazing start as a really engaging platform. It’s live, conversational and simple. The world can have a conversation with a broadcaster immediately. So making it faster and easier to use on Twitter is a big part of our future plan,” he said.

But Twitter isn’t the only social media network attempting to entice potential customers by providing fast and accessible news. Facebook, with more than 1.4 billion active members, is also seeking to get in the fray and launched its Instant Articles service in May.

The service provides an endless stream of news content under its Instant Articles page, with links that connect readers to the websites of the media companies that provide news content.

The move serves as a lucrative deal for media companies, most of which are concerned by the continuous drop in readership in the mobile era.

Given the huge number of active users Facebook enjoys, the scope of the potential audience has worked as a massive incentive for media companies. Participation also promises them considerable new revenue sources as they shift from web to mobile, with a decline in revenue from conventional marketing.

Dominant media companies like the New York Times, the Guardian, National Geographic, NBC and BBC have already jumped on the bandwagon.

Another point of appeal to media groups is the share of revenue between them and Facebook. For ads appearing alongside Instant Articles, news providers are entitled to 100 percent of the revenue, with no commission fees by Facebook if they sell them.

On the other hand, Facebook can keep 30 percent of the ads it sells with the rest still going into the pockets of its publishers.

This deal stands in stark contrast to business practices here in Korea, where media companies and portal sites such as Naver, the domestic equivalent of Google, have long bickered over the amount news content providers must pay.

To this end, the mega search engine in June launched Google News Lab, through which journalists can organize information drawn from Google’s information reserve and use them to create news with tools provided by the company.

“[Google News Lab intends to be] a single doorway through which newsrooms and journalists [can see and] understand all that Google has to offer for the future of the media,” said Google News Lab Director Steve Grove.

He noted that News Lab had come about in consideration of the unique position Google had in tackling the challenges currently facing the media, though he admitted that Google had sometimes intentionally and unintentionally disrupted the industry.

In this sense, collaboration between the media and social networking sites is seen as inevitable, especially amid growing demand for online news content.