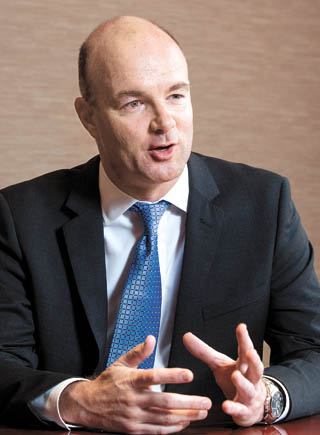 Korea should take a second look at the value of coal which can be a cheap and reliable source of power in times of a tough economy, a coal expert said.

Benjamin Sporton, chief executive of the World Coal Association and the coal industry advisory board member of the International Energy Agency (IEA), said coal is still in high demand as a frugal choice mostly in emerging Asian economies, despite strong global efforts towards carbon reduction.

“If a country takes out coal too much from the energy mix, especially in an industrial economy like Korea, the country has to risk increases in electricity prices, which reduces the competitiveness of the economy,” said Sporton, at an interview with the Korea JoongAng Daily on Monday in central Seoul. “It also threatens the reliability of electricity supply and affordability of overall electricity.”

Despite the government’s strong drive for nuclear power, Korea is still the world’s fourth-largest coal importer, bringing in about 130.9 million tons last year.

Korea is one of the largest players in Asia in the clean energy technologies, along with Japan and China, having implemented carbon capture and storage technologies and emission efficiency technologies that reduce emission up to 35 to 40 percent.

Q. What brought you to Korea and what’s Korea’s part in the global coal industry?

A. I was here to visit the Global Green Growth Institute, a nongovernmental organization which got to headquarter in Korea on an invitation from the Korean government. The initiative is based on the belief that developing countries can make economic growth while pursuing sustainability. I told them about the role of clean coal technologies, which we think can contribute in developing economic growth as well as saving the environment.

Korea is an important location for developing clean coal technologies including carbon capture and storage technologies (CCS) and high-efficiency low-emission (HELE) coal power generation facilities - a technology that many coal power plants already have in place - throughout Asia, along with Japan and China.

The HELE technology reduces emissions of carbon dioxide from burning coal, by about 35 to 40 percent, depending on the technology. Five power generation affiliates of Korea Electric Power Corporation (Kepco) have implemented it.

Korean companies are also developing CCS technologies. It captures up to 90 percent of the CO2 generated and stores it underground. I think it will take about 10 to 15 years until we see it more often, built at a substantially lower cost.

Coal has been a significant source of energy throughout history, but now there is a strong global effort to reduce carbon emissions. Why should we pay attention to coal again?

If a country takes out coal too much from the energy mix, especially in an industrial economy like Korea, the country will risk increases in electricity prices, which reduces the competitiveness of the economy, and threatens the reliability of electricity supply and affordability of overall electricity.

In Germany, for example, there recently has been a big shift towards renewable, trying to rapidly increase the role of renewables in its energy mix. That has been an expensive exercise for the German economy, power prices going up substantially, and industries really struggled with competitiveness due to expensive electricity.

I think it’s really important to realize that coal has benefits in terms of being an affordable, reliable and accessible source of energy. Of course, we have to recognize the environmental concerns of coal, but modern technologies can solve such problems.

How is the world using coal?

Unlike Europe and the U.S. with strong policy drives on renewable energy and shale gas, Asian countries still have a strong demand on coal.

The International Energy Agency in 2011 expected that the demand for coal in Asia will rise about 4.5 percent every year until 2035. That demand is especially high in India and Southwestern Asia.

India is a country with severe energy poverty, where 300 million people are without access to electricity. The Indian government plans 292 gigawatts worth of coal-powered thermal plants, which is a huge figure. I think that shows how coal is going to be a significant part as a source of energy for a long time to come.

Japan is looking at coal to maintain 26 percent of its energy mix for the next 20 to 30 years. The growth in China slowed, but the coal industry in China is estimated to grow by 45 percent in the next two to three decades as well.

Do you mean that emerging economies are going to be the next flagship market for the world’s coal industry?

Emerging economies show a significant demand for coal, with many of them building coal power stations, like the 60 plants planned in Indonesia, 50 planned in the Philippines, and in India and Pakistan. They are short of energy they need for economic growth, and coal is an accessible and affordable choice for them.

In India, for example, half of its coal power plants constructed in the past decade are old-fashioned highly emitting ones that are also less efficient. The technology upgrades are quite an expense but that’s a role for development banks to finance. They want to use coal because they have domestic access to it.

Gas is more expensive requiring more infrastructure and transport, although these emerging countries have substantial gas reserves. Coal comes with higher emissions than nuclear, but many IEA studies show that coal power even with CCS and HELE technologies implemented will be as affordable as renewable energies in 2040.

Do you think these carbon technologies should be considered as part of a global climate change initiative?

In fact, the IEA also highlighted that countries should work on enhancing efficiency and carbon emission levels at their coal power stations. As of now, the average efficiency at the world’s coal plants is about 33 percent, but the IEA said, carbon dioxide of two gigatons can be saved from emission if the coal power plants’ average efficiency rises to 40 percent.