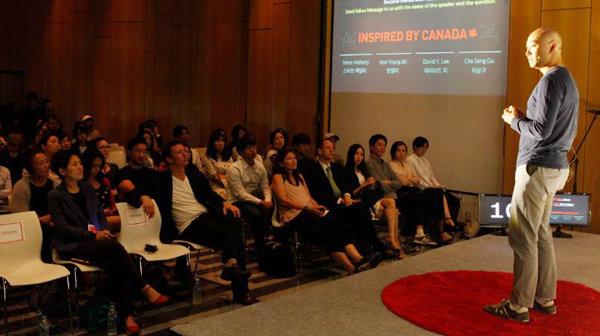 David Lee, the founder and CEO of Shakr Media, speaks on Thursday night at a TEDx conference at the Canadian Embassy in Jung District, central Seoul. By Park Sang-moon

Nearly 100 people gathered Thursday night at the Canadian Embassy in Jung District, central Seoul, for a TEDx conference that touched upon Canada’s cultural values and the quality of life there.

This community-based incarnation of the talks, which ran for almost three hours and featured four guest speakers, was the second in a series launched by TEDxSeoul, known as the Salons in Embassies in Seoul (S.E.S) Project. The project aims to host TEDx conferences at embassies so that locals can “experience the distinctive cultures of each country.”

“Canada is a very close country to Korea,” but the thoughts that people here harbor about it barely goes further than “studying abroad, immigration and the working holiday program,” the Canadian Embassy said in a press release.

“Canada’s prioritized values lie in cultural diversity, human rights and the rights of minorities and women. These values, without question, act as a firm foundation that supports this culturally and racially diverse country.”

In order to project that notion onto a select crowd from the local community, four speakers took the podium: Steve Hatherly, a radio announcer for EBS and TBS eFM; Han Young-mee, a social entrepreneur who runs Organization Cuisine and Sloby Life; David Lee, the founder and CEO of Shakr Media, a video-making start-up; and Cha Sang-gu, a Canadian pop singer set to debut soon.

“The two gifts that I received from Canada during my year-long stay in Toronto,” said Han, “was diversity and a sense of freedom. Inter-human relations are very horizontal and you never feel that you’re discriminated against, which has formed a positive energy inside of me.”

Lee, who established his first start-up at age 14, added that Canada was a place where it was “acceptable to be rebellious,” and that previously living there had enabled him to differentiate himself from others and find his own path.

Thursday’s event wrapped up a month-long set of cultural events launched by the Canadian Embassy called Seoul Meets Canada. The annual project, co-organized by the Seoul Metropolitan Government, was the third of its kind; it included a book exhibition featuring Canadian books and an open house at the embassy.

Canada and Korea celebrated the 50th anniversary of the establishment of diplomatic ties in 2013.