Red light for the centrist camp

Red light for the centrist camp 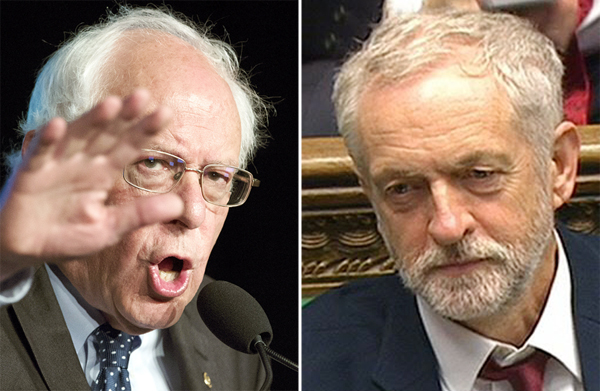 Sen. Bernie Sanders, a self-described democratic socialist, is leading over Hillary Clinton in the run for the Democratic presidential nomination in the United States. In the United Kingdom, Jeremy Corbyn, a radical leftist who openly opposes a freemarket economy, has been elected as the leader of the Labour Party with a landslide victory.

The two have two things in common. They are not new stars emerging from the blessings of the party, like Tony Blair or Barack Obama, but veterans who have adhered to their beliefs throughout their political careers. The 77-year-old Sanders was an “independent fighter” who filibustered a bill on tax relief for the wealthy pushed by both the Republicans and Democrats by giving an eight and a half hour-long speech. Corbyn, 66, was an outsider who voted against the party line over 500 times in his 30 years in Parliament.

The other common ground is that they don’t brandish the old weapon of traditional leftists. They say, “Let’s get back the power monopolized by the top 1 percent and create a better world for the 99 percent.” After the 2008 financial crisis, people have increasingly found the growing wealth gap uncomfortable, and Corbyn and Sanders are supported by young and undecided voters rather than aditional leftists. Corbyn could be elected not with the support of Labour Party members but the affiliated supporters who paid 3 British pounds ($4.70) to cast a vote. Sanders is supported by young Americans who are in despair, just like those in Korea and the rest of the world.

Of course, they cannot change the world overnight. Surrounded by Blairites, Corbyn’s role is bound to be limited within the party. And no one can be sure whether the Sanders boom will continue to the main round. But when you see one or two swallows, spring is near. We need to pay attention to changes in the global trend.

It is noteworthy that the young and swing voters rave over old, leftist politicians. They are tired of the fancy rhetoric of the “caviar liberals.” Business Insider argued that the claims to nationalize railway and energy sounded clearer and more sincere than the centrist liberals who demand lesser of the two evils by presenting policies not distinguished from the conservatives.

It means a red light for the centrist camp. The makeshift ladder cannot connect the growing gap of polarization. The supporters of Corbyn and Sanders are the ones who already showed their opinions in action, such as in Occupy Wall Street. If not addressed now, it could lead to more radical actions. There is no future for moderates without embracing them. More importantly, Korea won’t be an exception.