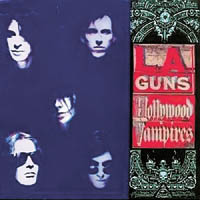 
Alice Cooper has made a career out of keeping the creepiness front and center in hard rock.

His latest project Hollywood Vampires - a true supergroup including Aerosmith guitarist Joe Perry and actor-guitarist Johnny Depp - is an outgrowth of his most recent “Raise the Dead’’ tour, which featured Cooper covering classic rock songs from bands who had a member die from drug or alcohol abuse. Offerings include covers of The Doors (Jim Morrison), The Who (Keith Moon), Led Zeppelin (John Bonham) and T-Rex (Marc Bolan).

Cameos from classic rock legends abound here, as well, including contributions from Paul McCartney, Joe Walsh, Zak Starkey, AC/DC’s Brian Johnson, Perry Farrell, Robby Krieger and Dave Grohl. Most (but not all) the tracks are from artists who saw members die from substance abuse. Among the strongest on “Hollywood Vampires’’ are a pounding cover of The Who’s “My Generation,” a Krieger-powered Doors medley of “Five to One/Break on Through,” and a version of T-Rex’s “Jeepster” that manages to be heavy and pop-y all at once. AP