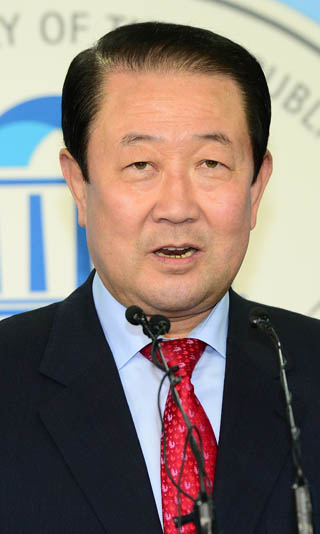 Rep. Park Joo-sun, a three-term lawmaker of the New Politics Alliance for Democracy (NPAD), left the liberal opposition party on Tuesday to start his own party. He is the first seated lawmaker to abandon the country’s largest opposition party.

“The NPAD is an obsolete political force,” Park, who represents Gwangju Dong District, said in a press conference on Tuesday. “We need to dismantle this old political force and create an alternative political power that can compete against the ruling party.”

Park, a prominent critic of NPAD Chairman Moon Jae-in, went on to say that the party had lost its democracy due to the control held by the loyalists of the late President Roh Moo-hyun. Moon was Roh’s closest political ally and is considered the leader of the so-called pro-Roh faction within the main opposition.

He added that the party had become a reactionary liberal group confined by the ideology of 1980 and that the public has already pronounced it dead due to its incompetence and inability to win at the polls.

Korean politics, the three-term lawmaker said, must put an end to its confrontational two-party system to better serve the public and that a political revolution - including a constitutional amendment to introduce a semi-presidential system with multiple parties - must be carried out before the next presidential election.

He argued that there were a significant number of NPAD lawmakers who agreed with his plan, those representing not only the Honam region, which comprise Gwangju, South Jeolla and North Jeolla, but also districts in the capital region. Park’s plan fueled the split of the liberal arena ahead of the April general elections.

Rep. Chung Jung-bae, an independent lawmaker who abandoned the NPAD earlier this year, will form a new political party by January, gathering supporters from Honam, while former South Jeolla Governor Park Joon-yung has also said that he will launch his own political party.

“He is distorting the sentiments of Honam voters,” said Kim Sung-soo, an NPAD spokesman. “He is also directly damaging the wishes of party members and supporters who want innovation and unity for the party in order to win the next presidential election.”

In 2000, Park won a seat in the general election as an independent candidate and then joined the Millennium Democratic Party (MDP), a predecessor to the NPAD. Ahead of the 2004 general election, he was convicted on bribery charges and imprisoned. He subsequently quit the party and ran as an independent, operating a campaign from prison. Though he lost, he still returned to the MDP after he was acquitted in a final appeal.

In 2012, Park left the party again after a member of his campaign committed suicide amid speculation that he had rigged the primary.

After the party decided not to nominate a candidate for the Gwangju Dong District, Park left the party, ran as an independent and won.