International students at Hankuk University of Foreign Studies hold signboards showing the qualities they believe give Korea the greatest “charm factor” on Sept. 4 at the campus in Dongdaemun District, eastern Seoul. By Cho Moon-gyu

When 18-year-old Angelina Salwa R.A Hodali was first introduced to K-pop, she envisioned Korea to be as dynamic as the upbeat melodies.

Having watched countless music videos and awing at the glamorous stage costumes of idol groups like Girls’ Generation, Big Bang and Exo, the young Palestinian came to fall in love with a country more than 8,000 kilometers (5,000 miles) away - so much so that she decided to pack her bags for Seoul.

Hodali arrived here early this month and is currently studying at Hankuk University of Foreign Studies (HUFS). Her dream, she said, is to gain the entrepreneurial skills necessary so that she can one day lay the groundwork for a similar pop culture craze in her native land, where most practice Sunni Islam.

“I want to establish a music agency like SM Entertainment or YG Entertainment,” she said, adding that she hoped her future company could replace the all too frequent sounds of gunfire with music.

To honor the 50th anniversary of the establishment of the JoongAng Ilbo, an affiliate of the Korea JoongAng Daily, a special reporting team set out to survey thousands of people like Hodali nationwide to find out what they believe defines Korea.

Supplementing that mission were interviews with more than 100 high-profile opinion leaders worldwide.

The survey, jointly conducted by the JoongAng Ilbo and Kyung Hee University, showed that more than one out of every four people nationwide (26.6 percent) considered local pop culture as Korea’s “greatest charm.”

The pool encompassed 3,068 people, who followed up that answer with the country’s traditional culture (22.4 percent), its medical services (17.7 percent), the economy (14.4 percent) and Korea’s education system (9.4 percent). 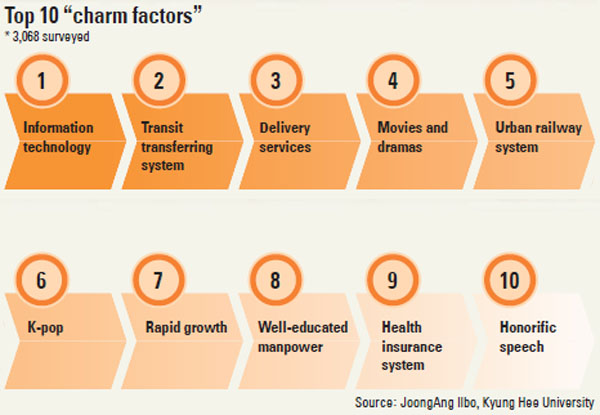 In a similar survey that posed the same question to 124 opinion leaders, including lawmakers, ministers and CEOs, 54 percent of respondents chose pop culture and traditional culture as Korea’s most defining
assets.

“Korean culture, including K-pop, is a national brand through which the country can appeal to the rest of the world,” said Samsung Electronics President Lee In-yong.

Foreign Affairs Minister Yun Byung-se told the special reporting team via email that “traditional culture and cutting-edge technology” were Korea’s chief tools that allowed it to thrive after the 1950-53 Korean War.

Lee Sang-min, who heads the creativity education center at the Catholic University of Korea, pointed to Psy’s “Gangnam Style” (2012), which still holds the record as You Tube’s most viewed video ever, and boy band Super Junior’s “Sorry, Sorry” (2009), which topped Taiwanese music charts for 115 consecutive weeks, in relaying how K-pop was the “unique outcome” of Korea’s talent and cheerful spirit.

“When you look at Korean dramas and movies, you notice they’re based on the sentiments of friendship, loyalty and love among family. And at a time when people around the world are going through what we call an ‘atomization’ process in human relationships, such productions can come off as unconventional,” he said. 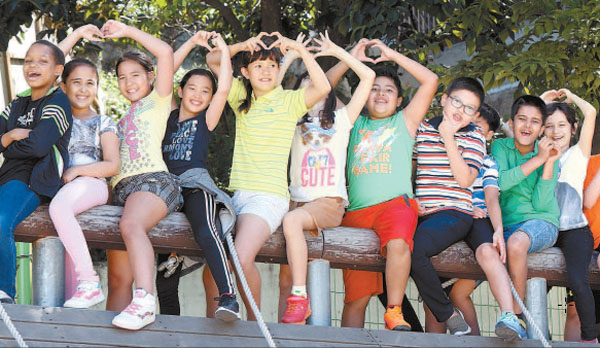 Others included United Nations Secretary General Ban Ki-moon (No. 2) and former President Park Chung Hee (No. 4), who is the late father of President Park Geun-hye.

The current President Park ranked No. 11, just one slot behind Psy and above golfer Park In-bee, while New Politics Alliance for Democracy lawmaker Ahn Cheol-soo ranked last at No. 20.

“The commonality shared among the top three figures is that they’re globally renowned,” said Kim Jung-baek, a sociology professor at Kyung Hee University. “They’re people who have boosted the country’s reputation in the international arena.”

In an email sent to the special reporting team, Kim Yu-na said she felt proud to be Korean, especially because of her fellow countrymen’s perseverance and passion.

Nikolai Johnsen, 27, the Norwegian cast member of the JTBC talk show “Non-Summit,” said it was the country’s dynamic ambience that caught his attention when he first arrived here after finishing an exchange program in Japan.

“The Japanese are prudent and patient, whereas Koreans are speedy and driven,” Johnsen said. “This energetic country drew me in.”

In a more elaborate questionnaire that asked the 3,068 respondents to grade 39 “Korean charm factors” chosen by the JoongAng Ilbo and Kyung Hee University, K-pop and domestic films and dramas came in at No. 4 and No. 6, respectively.

Information technology topped the chart, followed by the transit transferring system (No. 2) and delivery services (No. 3).

Alberto Mondi, the Italian cast member of “Non-Summit,” nodded at the outcome, acknowledging how Korea provided delivery services no matter where customers were located.

Regardless of how drunk people are late at night, in most cases they are still able to use public transportation, he added.

“It’s something you just can’t witness in any other country,” he said.