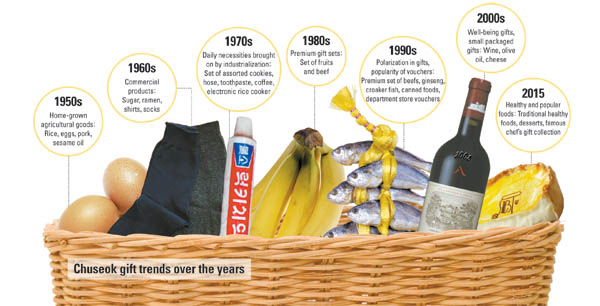 Chuseok holiday gifts over the years reflect Korea’s economic transformation and give an insight into every-changing popular trends.

Ads published 50 years ago in September, 1965, just days before the holidays, give a taste of the nation’s preferences.

“Do not hesitate, go for home brand socks for this year’s Chuseok!”

In the newspaper, there were stories about how items priced 1,000 to 2,000 won were popular at children’s clothing stores at Namdaemun and Dongdaemun. Stores were also selling a lot of rubber shoes for 60 to 100 won.

Holiday gifts also reflected lifestyles, habits and consumer interests at the time, and changes, and the country’s economic fortunes.

A look at gifting trends over the past 50 years ranges from a basket of eggs to imported products.

Right after the Korean War in the 1950s, there were no commercial gifts.

Instead, gifts comprised of flour, rice, eggs, pork, pepper and sesame, things that are home grown and chiefly aimed at satisfying hunger. In the 1960s, when the country is still recovering from the aftermath of the war, most popular gifts were daily necessities such as sugar, soap and spices. There still wasn’t enough food or daily amenities available.

Back in those times, sugar was often used as household medicine. When a person was infected with Shigellosis, they would drink a cup of sugar water mixed with buckwheat powder. Sugar water was also prescribed for stomach aches and was also served to house guests.

Koreans were feeling more prosperous during the 1970s with the country’s industrialization. There were plenty of jobs and companies were seeing their revenues spike.

Workers also enjoyed a big rise in their salaries year after year. During holidays, Koreans were happy to shop for gifts, and the options also increased to around 1,000 different items.

Cooking oil, toothpaste, shirts and leather goods were typical gifts. Prices ranged from 3,000 to 5,000 won. Sets of coffee products and assorted cookies were the best gifts for both soldiers and children.

As the country’s economic growth peaked, consumption culture developed and there were so many high-end holiday gifts available that there was a public campaign against costly holiday gifting.

As more Koreans sought personalized gifts, types of gifts increased to around 3,000.

Polarization between expensive gifts and less pricey ones became clearer around this time. As a growing number of consumers sought to save, low and mid-priced gift sets became popular. Among food items, regional foods were preferred over packaged ham or tuna. At the same time, super-expensive gifts like 1 million won imported foreign brand liquor or yellow croaker fish emerged and were sold robustly. Around this time, it became clearer that department store gift sets were for personal gifts, and discount retailer sets were for groups.

Polarization of gifts continued during this era. As the concept of “well-being” emerged, gifts such as health foods and supplements like ginseng and mushrooms became popular as well. Wine, olive oil, cheese and exotic foods like truffles, mango, melon, lobster and king crabs also sold well.