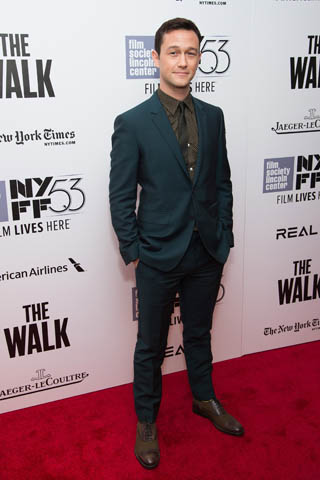 NEW YORK - Joseph Gordon-Levitt would only nod and walk away when asked about his secret meeting with Edward Snowden.

But earlier, the actor did take the time to compare playing the U.S. intelligence leaker to portraying another real-life character in his latest film. Gordon-Levitt plays the high-wire artist Philippe Petit, who in 1974, after years of planning, illegally stretched a wire between the World Trade Center’s twin towers and walked across it.

“Both took enormous risks, showed incredible courage, broke the law, and did something they very deeply believed in,’’ Gordon-Levitt told The Associated Press on Saturday at the world premiere of Robert Zemeckis’ “The Walk,’’ which chronicles Petit’s high-wire stunt.

Gordon-Levitt believes even the differences between Snowden and Petit have similarities.

Snowden, a systems analyst, gained notoriety in 2013 for leaking classified information from the U.S. National Security Agency about its surveillance programs, which were spying on ordinary Americans. He fled to Russia, where he was granted asylum despite demands by the United States that he return to face espionage and other charges. Gordon-Levitt secretly met with Snowden in Russia to discuss the role.

Written and directed by Oliver Stone, “Snowden’’ comes out in 2016.