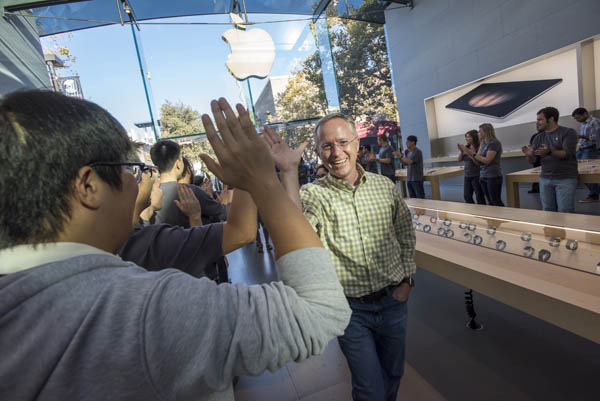 A customer is greeted at an Apple store in Palo Alto, California, on Sept. 25. From Sydney to New York, some of the Apple faithful waited in lines for more than two weeks to be among the first to receive the new iPhone 6s and 6s Plus. [BLOOMBERG]

Apple sold a record 13 million iPhones during the debut weekend of its latest handsets, as enthusiasts from Beijing to New York rushed to stores to be the first with the new devices.

The results were in line with analysts’ expectations and boosted by sales in China, an increasingly critical region for Apple’s business. The company sold 10 million iPhones during the debut of the iPhone 6 and 6 Plus last year, even though the world’s most populous country wasn’t part of the initial release.

Apple’s ability to build such demand for its marquee product every year is unique in global business. Lines stretched from stores around the globe, with some fans spending a week or more waiting to be the first with the handset. The average selling price for an iPhone last quarter was $660 (not including carrier subsidies), which would translate to about $8.5 billion in revenue over the past 72 hours for Apple.

“We view 13 million as a ‘bull case’ number from the weekend as bears were saying 10.5 million to 11 million was possible,” Daniel Ives, an analyst at FBR, wrote Monday in a note to investors. The firm estimated that China accounted for 2 million to 2.5 million units over the weekend, meaning “non-China iPhone 6s units were up roughly between 5 percent and 10 percent versus its predecessor.”

Apple said earlier this month that sales would top last year’s 10 million record. Gene Munster, an analyst at Piper Jaffray, predicted sales would be 12 million to 13 million, thanks to initial sales in China. The new models were available in about a dozen countries and territories.

The release of a new iPhone has a wide economic effect. Investors watch the gadget’s introductions closely because Apple’s business increasingly is tied to the performance of the device, accounting for more than 60 percent of revenue. The company’s stock has fallen about 14 percent from a February high in part because of concerns that it won’t be able to maintain its impressive run of growth.

As the world’s most valuable company by market value, Apple’s performance has the ability to influence widely owned stock gauges, such as the Nasdaq composite index. A chain of suppliers who make components for the iPhone also rely on Apple for big portions of their business.

While the opening weekend sales figures are closely watched, a better indication of how the new handsets are selling won’t come until January, when the company reports results for the critical holiday quarter. Last year, Apple sold 74.5 million iPhones during that period, generating $51.2 billion in revenue.