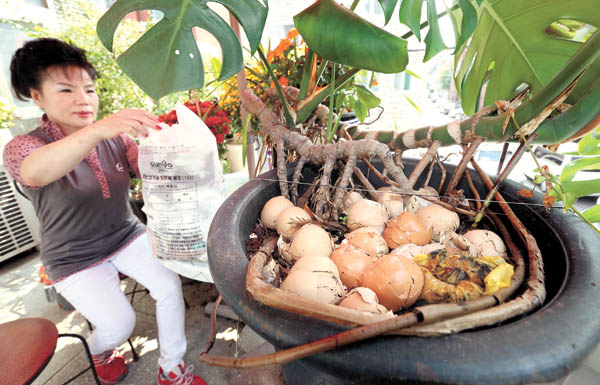 Choi Young-sun, 57, recycles eggshells by putting them into flowerpots as part of a challenge to use only one 10-liter plastic garbage bag in two weeks. By Kim Sang-seon

Some 200 residents of a neighborhood in Gimpo, Gyeonggi, are having a competition to see who can produce the least amount of waste in their daily life. Since Sept. 8, they have been challenged to produce only enough waste in a two week period to file one 10-liter garbage bag.

The Gyeonggi provincial government accepted a proposal by Ecotory, a social enterprise that encourages recycling, and chose Sanbon 1-dong in Gimpo to start the program. That neighbourhood was known for lack of interest in recycling.

To get her waste down, Kang Sun-ok, 60, created a garden on the roof of her house. She crushes chestnut shells, corn stalks, fish bones and clam shells to use as fertilizer.

Onion peels and green onion roots, which she used to throw away, are now used to make vegetable stock. After the broth is made, they are used as fertilizer as well. 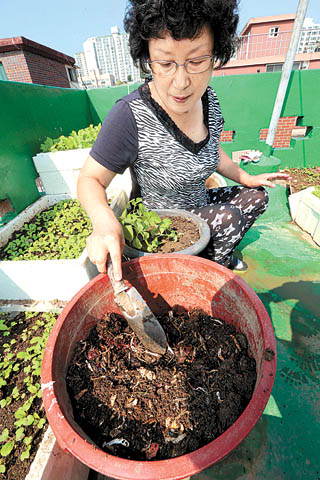 Kang has reduced the amount of her waste by some 30 percent. Before she started the challenge, she needed a 20-liter garbage bag every ten days. But now, a 10-liter bag is enough as she only produces seven to eight liters of waste in 12 days.

Choi Young-sun, 57, also got rid of all paper towels and tissues in her home except in the bathroom. Instead, she started to use handkerchiefs and dishcloths.

She now uses recycling bins. Her two children in their 20s, who think recycling is bothersome, received training several times, which taught them how to separate recyclables from trash.

Choi put some new ideas into action as well. She employs flowerpots to grow carnations and mums.

“If I put eggshells divided into halves in the flowerpots, the nourishment penetrates the soil and it also looks nice,” said Choi.

“As time goes by, I crash the eggshells into smaller pieces and mix them with soil. Then, on top, I put other eggshells. As a result, I was able to generate only 12 to 15 liters of waste per month.”

According to the Seodaemun District Office, a family produces 55 liters of trash per month. Choi’s output is less than one third that amount.

“Although recycling is tiresome, I believe it is worthwhile as it helps make our town a better place to live,” said Choi.

Sanbon 1-dong is also trying to cut down on the illegal disposal of trash by placing a so called “conscience mirror” in the areas where people dump their trash.

“Sanbon1-dong residents will film the process of transforming their town into a better place,” said Lee Dong-han, the owner of Ecotory. “I’m planning to organize a festival through which people can share what they have filmed, and we will evaluate each other’s achievements.”

“The neighborhood and Ecotory will try to apply the ideas generated by the citizens to other districts in order to broaden the program,” added Lee.