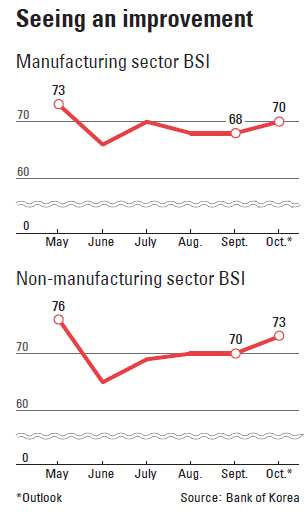 The BSI for September was 69, the same as the August’s reading, but since it remained below 100, it indicates Korean businesses believe the general corporate environment remains challenging.

“Amid slowdown worries in China, major exporters such as automakers appear to feel worse about their business conditions,” said Park Seong-bin, a Bank of Korea official in charge of corporate statistics.

But the consumption sector fared better, with beverage makers’ BSI reading 86, up from 84, and food makers’ figure rising to 73 from 69 in August.

In terms of the size of the companies, conglomerate manufacturers’ BSI reading was 72, while that of small-and-medium sized companies was 62.

Some 27 percent of manufacturers surveyed picked sluggish domestic consumption as the most challenging factor -- up from 24.7 percent in August.

The non-manufacturing sector’s September BSI was 70, the same as the previous month. Its outlook BSI was 73.

Their sales BSI was up 2 points to 79, and the October outlook BSI was 82.

Among non-manufacturing players, the real estate and rental service industry recorded the highest BSI reading of 82, up from previous month’s 80. Transportation and arts and leisure industries’ reading came out at 78, up from 77 and 72 respectively.

Meanwhile the overall economic sentiment index (ESI), an indicator of the private sector’s sentiment, was 93, the same as the previous month.