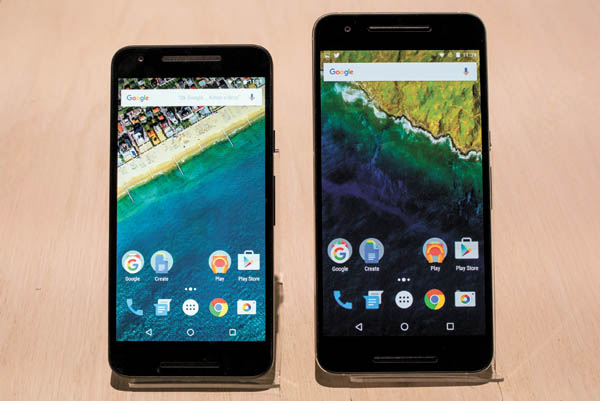 LG Electronics on Tuesday rolled out a third Nexus smartphone with Google called the Nexus 5X, which includes the latest Android operating system Marshmallow, an improved camera and a longer-lasting battery.

The phone is one of two that Google unveiled in San Francisco, with the other - the Nexus 6P - being produced by China’s rookie Huawei.

The Nexus devices, while attracting fewer sales, are released annually to showcase what Google sees as the best use of Android on handsets. 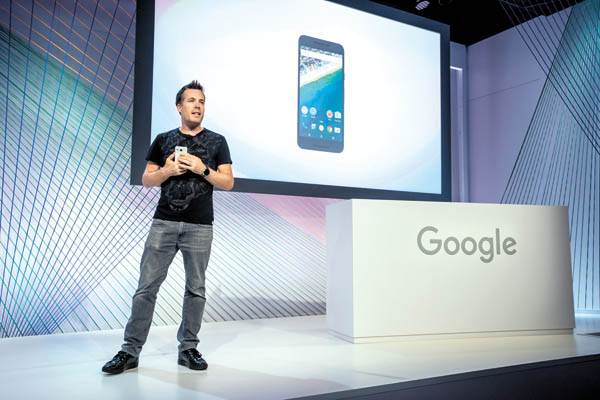 David Burke, director of Android engineering for Google, holds a Nexus 5X smartphone while speaking during an event in San Francisco on Tuesday. [Bloomberg]

In-store sales are scheduled on Oct. 20 in 40 countries across the globe, including Korea.

“The Nexus 5X is a well-made product that is a result of a strategic partnership between LG Electronics and Google,” said Cho Jun-ho, head of the mobile communications division at LG Electronics.

“We intend to target the global market with the phone’s reasonable price and attractive functions.

The announcement of the Nexus phone comes a day before LG will debut its “ultra-premium smartphone,” which it hopes will help the company recover from flagging performance in the past several quarters.

LG took the wraps off its flagship G4 smartphone in June, but it has so far ended up selling only hundreds of thousands of units so far.

LG - the second-largest smartphone producer in Korea and the fifth largest in the world - is set to showcase its new product, which will boast a 5.7-inch ultra-high definition display, dual front-facing cameras, a metal frame and detachable battery, in both Seoul and New York.

The company says the new phone will differentiate itself from the iPhone and Galaxy with its advanced camera and video features.

The Nexus 6P starts at $499, while the smaller Nexus 5X begins at $379. Both handsets come with a fingerprint sensor, taking a page from the iPhone. They also feature a quicker “Type-C” USB charging system and have new software that helps boost battery life.

The 6P has an improved camera that helps capture images in low light and includes slow-motion video tools, which are also available on the 5X.

The new phones will allow customers to remove about one-fourth of their pre-installed apps, providing more customizability.

The latest Nexus smartphones come with a crucial new option called Android Pay, Google’s latest effort to get more of its users to make payments using their mobile devices. The service - a response to the increasingly popular Apple Pay on the iPhone - turns devices into digital wallets that store credit and debit cards, which can then be used in physical and virtual stores.

The service will first be available in the United States and then will expand to other countries, including Korea.

Google is looking for new ways to generate demand for devices with its Android operating system, which manufacturers can use at no cost.

Android claimed 83 percent of the market in the second quarter, slightly down from 85 percent during the same period last year, according to market researcher IDC.

Apple’s devices climbed to 14 percent from 12 percent during the second quarter.

“It’s going to put pressure on partners, on the other vendors, to roll out these features and show what it is.”