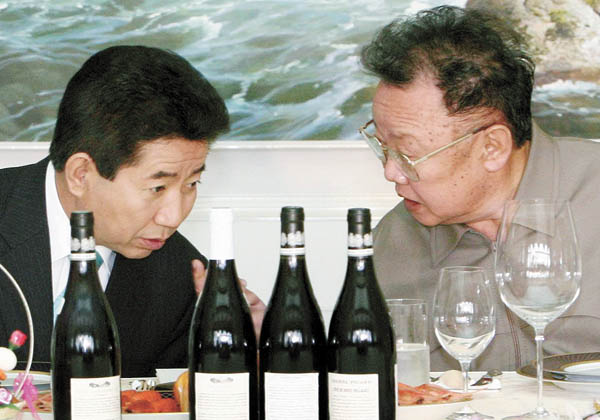 They were considered key officials in the Roh government, which lasted from 2003 to 2009, who helped facilitate holding the talks.

The memoir is set to be released Sunday.

The Oct. 4 Inter-Korean Summit Agreement initially included content calling for the signing of [a free trade agreement] between North and South Korea, they wrote. “However, it was deleted by officials from our side in the process of exchanging opinions.”

The book pointed out that, “Inter-Korean economic cooperation is an issue of internal transaction between the same people but at the same time has the characteristics of international trade, so by applying a customs-free system, it could become the basis for an international dispute.”

Under World Trade Organization (WTO) regulations, there was a possibility that current trade between South and North could have been seen as violating the most-favored nation principle, which prohibits countries discriminating between their trading partners. The FTA was initially proposed as a way of getting around that problem.

Yet, as the South Korean government reviewed the idea further, it found a constitutional regulation that does not recognize North Korea as a separate nation at all, and it was also thought that an inter-Korean FTA could brew domestic controversy. So the idea for a North-South Korean FTA was scrapped from the final Oct. 4 statement.

So far there have been two inter-Korean leaders’ summits, the first held in June 2000 under the Kim Dae-jung administration and the second held in October 2007 during the Roh administration.

The peace declaration, signed on Oct. 4, 2007, upheld the 2000 declaration and called for global discussions to replace the armistice that effectively ended the 1950-53 Korean War with a peace treaty. The process to secure a second inter-Korean leaders’ summit was a long one that entailed official and unofficial contacts between Seoul and Pyongyang over the course of more than 313 days.

Kim Man-bok describes that right after he was inaugurated by the Blue House as the new NIS chief on Nov. 23, 2006, he “strongly” proposed second inter-Korean talks to President Roh.”

Kim revealed, “President Roh Moo-hyun responded that there was no meaning in an inter-Korean leaders’ summit without progress in the North’s nuclear issue, but I stubbornly proposed again the need for a second leaders’ summit, and President Roh accepted it.”

In May 2007, Kim requested closed-door contact with Pyongyang and on July 29, Kim Yang-gon, the director of North Korea’s United Front Department, requested to meet with NSC Director Kim Man-bok in Pyongyang.

“The North Korean side responded under Director Kim Yang-gon’s name that its officials requested the NIS director to secretly visit Pyongyang from Aug. 2 to 3.”

The NSC director subsequently traveled to North Korea on the dates proposed by Pyongyang, and then visited North Korea two more times leading up to the summit.

Kim Yang-gon, likewise, visited the Blue House on Sept. 26, when South Korea solidified the need to address the peace treaty issue in the second leaders’ summit, economic cooperation and the need for a comprehensive statement like the June 15 Inter-Korean Summit Agreement, according to the book.

Kim said, “In 2007, through negotiations between North Korea and the United States, the Feb. 13 joint agreement was concluded, showing an indication of a possibility to resolve the North Korean nuclear issue, leading to a favorable atmosphere for holding a leaders’ summit.

In the Feb. 13, 2007 joint statement, drawn up in the grueling third session of the fifth round of talks between the six-party countries, Pyongyang agreed to shut down all its existing nuclear facilities by Dec. 31 of that year.

Kim continued, “Securing international conditions is important in enabling a leaders’ summit, and how to utilize the international community’s atmosphere in regard to the North Korean nuclear issue.”

During the 2007 summit, Roh raised to Kim Jong-il the issue of sealing an agreement to end the 1950-53 Korean War and a peace treaty; the book describes that the North Korean leader insisted that the issue was not one between Seoul and Pyongyang but a “situation that needs to be resolved between North Korea and the United States.”

But Roh conveyed to Kim that U.S. President George W. Bush had emphasized that North Korea’s denuclearization was a precondition to sealing a peace treaty and that there were efforts being made to improve relations between Pyongyang and Washington, in which Kim showed interest.

Roh also emphasized that Bush had expressed his intention to push for an end of the war agreement between the leaders of the two Koreas and the United States.

Consequently, Article 4 of the 2007 declaration states: “The South and the North both recognize the need to end the current armistice regime and build a permanent peace regime.”