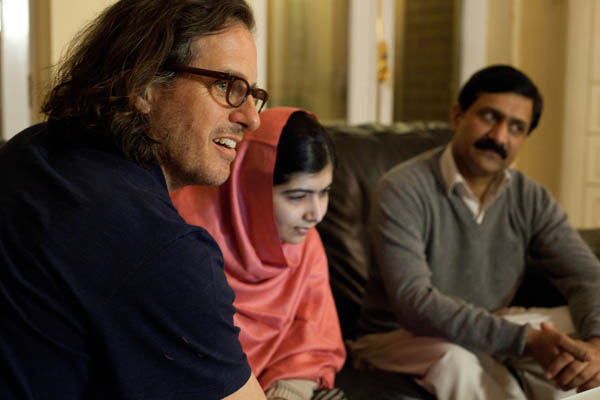 In this Dec. 17, 2013, photo released by Twentieth Century Fox Film Corporation, director Davis Guggenheim appears in Birmingham, England, with Malala Yousafzai and Ziauddin Yousafzai during the filming of the documentary, “He Named Me Malala,” released in U.S. theaters on Friday.[AP/NEWSIS]

LOS ANGELES - Davis Guggenheim has made movies about world leaders (Barack Obama, Al Gore) and rock stars (U2, Jimmy Page, Jack White), but it’s his new film about a girl and her dad that affected him most.

Of course, Malala Yousafzai is no ordinary girl. Guggenheim spent a year and a half with the Nobel Peace Prize winner and her family to make the documentary “He Named Me Malala,” opening Friday. He came away deeply moved.

“She’s my favorite,” the Oscar-winning documentarian (“An Inconvenient Truth”) said. “You’re not supposed to have favorites, but she’s incredible. I’ve fallen in love with this family.”

Even more than Malala’s activism, Guggenheim was inspired by the Yousafzai family dynamic, how they value tradition, education and fun.

“He Named Me Malala” is a personal portrait of the teen activist, who was shot in the head by the Taliban in 2012 for advocating for girls’ education in Pakistan. She recovered and continued her work globally, addressing the United Nations in 2013 and winning the Nobel Peace Prize last year.

The film centers on Malala’s close relationship with her father, Ziauddin Yousafzai, a teacher and public speaker who knew his daughter’s gender didn’t limit her potential.

He learned about Malala’s family history of public speaking: Her grandfather was a cleric and her dad has long defended education and liberty in the face of religious extremism. The filmmaker learned about the Pashtun heroine she’s is named for: Malalai of Maiwand, a brave young woman who rallied Afghani troops against the British Army in 1880 and was killed for being so outspoken.

He followed Malala and her father as they traveled to Kenya, Nigeria and Jordan to support children’s rights. Guggenheim also filmed Malala at home, where she does her homework, teases her brothers and blushes as she looks at pictures of Roger Federer online.

But even after hundreds of interviews and countless hours spent with the Yousafzai family, Guggenheim says 18-year-old Malala is still “a complete mystery to me.”

“Clearly, she’s a combination of all these wonderful things: her father’s dream for her, her mother’s intense spirituality,” he said. “But also (it’s) just who she is.”

“This movie has been my favorite movie because it really has changed my life. It blows me away,” he said. “I want what they have. I want to be the father that Zia is. I want my daughters to feel the love that he gives Malala. I want them to feel that love and respect.” AP