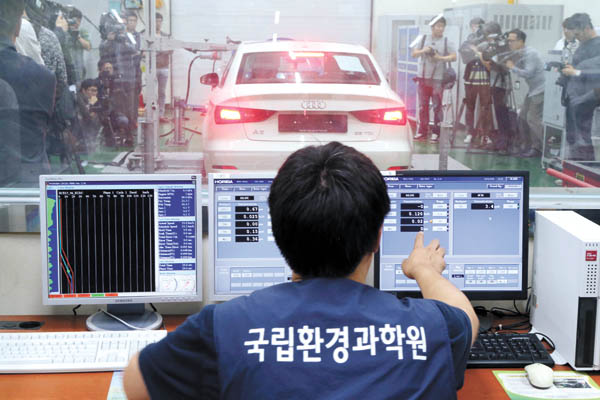 An engineer of the National Institute of Environmental Research in Incheon conducts emissions test on an Audi A3 on Thursday. By Shin In-seop

It has been a mere two weeks since Volkswagen shocked the world by admitting to rigging its diesel cars with software to cheat during emissions tests, but the scandal is already impacting sales.

According to Volkswagen Korea, sales in the country for September
decreased by 7 percent from a month earlier.

“We sold about 3,145 units in August, but the figure dropped to below 3,000 last month,” a spokesman for Volkswagen Korea said. “We worry that the number might drop even more in October when the inspection report on vehicles will be released by the Ministry of Environment.”

Since the scandal broke on Sept. 18, it is difficult to definitively say that September’s sales were impacted by it.

But Volkswagen failed to boost its sales even though the government lowered the consumption tax on luxury goods, including cars. Many other automakers, including the nation’s two auto giants, Hyundai Motor and Kia Motors, and even the country’s smallest automaker, Ssangyong Motor, sold more cars in September than they did in August.

Volkswagen Korea said sales might have been impacted by the scandal and the long Chuseok holiday.

“About 20 percent of customers who ordered a new car before Chuseok [the Korean harvest festival] canceled their contract after the holiday,” said a Volkswagen dealer in Seoul.

“Even customers who were interested in cars that had nothing to do with the scandal are calling us so many times to check whether those models truly are safe from scandal.”

The company did not provide an exact figure for September, but the score sheet that will be released Tuesday by the Korea Automobile Importers and Distributors Association is being awaited by industry insiders, especially other German brands like BMW and Mercedes-Benz.

According to a survey released by Consumer Insight on Thursday that asked about the scandal, 47 percent of respondents, or 2,951 people, said they wonder whether all European automakers played similar tricks as Volkswagen, while 11 percent said they believe all German cars must be related to the scandal.

September was a good month for Korean automakers in terms of sales, not only in the domestic market but also in global markets.

The two auto giants had the best September ever in the U.S. market with a total combined sales of 113,835 units, which was 17.8 percent higher than a year ago. Their growth rate was bigger than the average growth rate for the U.S. car market, which was 15.7 percent in September. The sales were led by Hyundai’s new Tucson SUV with 7,925 units sold, a rise of 120.8 percent from a year ago.

The Sorento SUV led the sales for Kia with 9,380 units sold, which increased by 42 percent year on year, followed by the Carnival minivan with 3,039 units sold, a 395.8 percent rise.

GM Korea enjoyed the impact of new wheels, the Spark minicar and Impala sedan with a total score of 16,393 units in the country, 24 percent higher than a year ago and also an all-time high for September since the Seoul office was established in 2002.