Kaesong’s accumulated output at $3B

Kaesong’s accumulated output at $3B 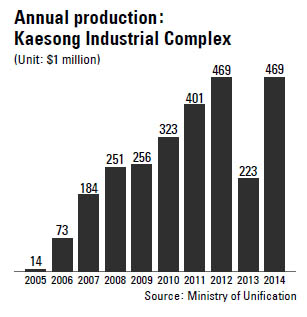 The Kaesong Industrial Complex’s accumulated production value is expected to have hit the $3 billion mark, more than a decade after its launch, according to government data.

As of the end of July, accumulated manufactured goods were valued at $2.99 billion, with average monthly production output hovering at around $46 million.

Accumulated production value was thought to have surpassed $3 billion sometime after July.

The complex, located in the border city of Kaesong, where South Korean companies produce goods with cheap North Korean labor, began operations in 2004 in compliance with the joint declaration signed at the 2000 inter-Korean summit by the late South Korean President Kim Dae-jung and the late North Korean leader Kim Jong-il.

Taking advantage of the competitive labor costs provided by North Korea, 124 South Korean companies are now operating in the industrial complex, which remains as the last vestige of inter-Korean cooperation.

Other collaborative ventures have been suspended amid economic sanctions imposed on the North following its torpedoing in 2010 of the Cheonan warship, which left 46 sailors dead.

The volume of manufactured goods at the Kaesong Industrial Complex has increased annually since its opening, except for in 2013, when it was temporarily shut down for five months amid tensions on the peninsula. In 2008, the complex surpassed the $200 million mark in production and continued to expand yearly production levels to reach $469 million in 2012.

Due to the temporary shutdown, the complex saw its annual production drop down to $223 million in 2013, though it bounced back to $469 million the following year.