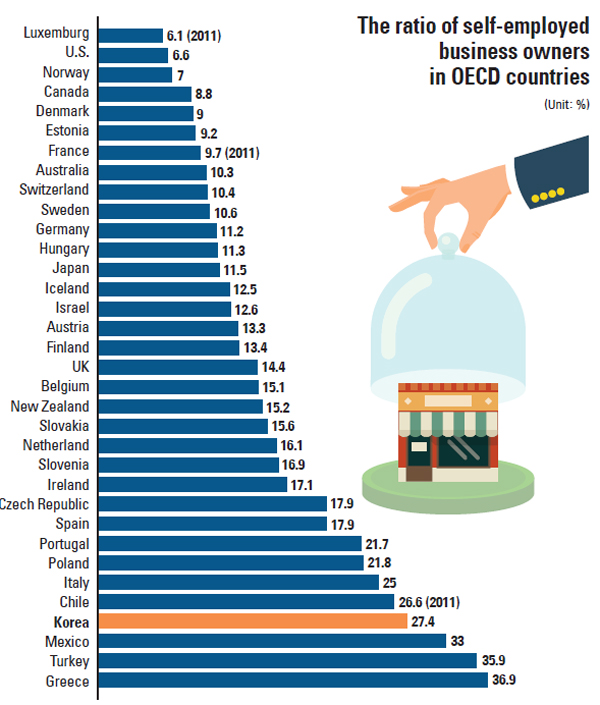 Korea ranked fourth highest among OECD countries for the number of self-employed people, data released from an opposition lawmaker showed. But a third of them made less than 1 million won ($860) per month.

A press release from Rep. Yun Ho-jung of the New Politics Alliance for Democracy showed the ratio of self-employed workers in Korea’s economically capable population was 27.4 percent in 2013, the fourth highest among 34 OECD member countries.

The ratio was a surprise because the top three countries - Greece (36.9 percent), Turkey (35.9 percent) and Mexico (33 percent) - were tourism-dependent economies, which Korea is not. Most other developed nations had ratios of less than 20 percent, such as Japan (11.5 percent) and the United States (6.6. percent). Korea’s ratio was even higher than those of Italy (25 percent) and Spain (17.9 percent), which are also heavily reliant on tourism.

“Korea’s situation is because of retirees,” Yun said in press release. “Many people from the baby boomer generation, born between 1955 and 1963, retired and started their own businesses with small sums of money and often without sufficient preparation.” 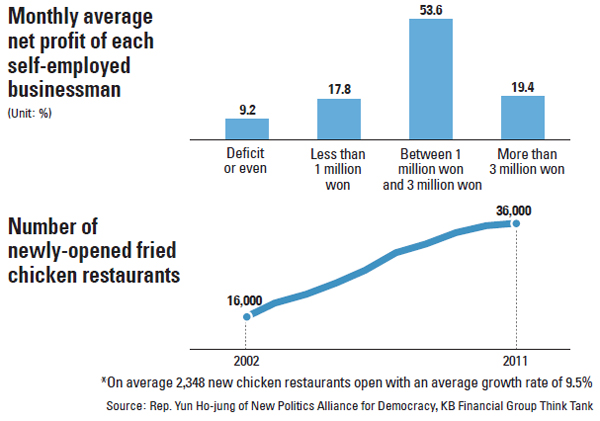 Many retired people from the baby boomer generation fail in their first venture and go onto another, again without proper preparation or funding, repeating the vicious cycle, Yun pointed out.

Citing a poll from the Small Enterprise and Market Service in 2013 that surveyed about 10,000 self-employed people, Yun said 27 percent of people who started their own business lost money, broke even or made less than 1 million won monthly.

“Most of the retirees are middle-aged, in their 40s or 50s, and they mostly start a chicken and beer pub or a pizza restaurant, bringing in their entire family to work,” Yun said. “If their business fails, they lose their retirement pay and can’t pay back loans.”