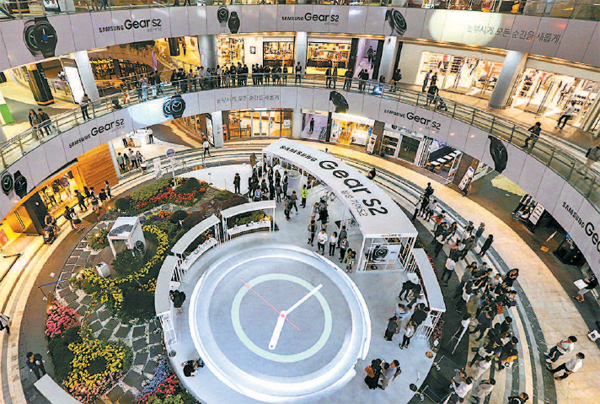 Samsung Electronics, the biggest company in Korea, will announce an estimate of its third-quarter performance on Wednesday.

But when compared to the previous quarter, Samsung’s third-quarter operating profit would be 320 billion won less than 6.9 trillion won, a 4.8 percent decline.

Many investors are looking ahead to Samsung Electronics’ performance next year.

It will be difficult for Samsung Electronics to generate profits exceeding market expectations for the final three months of the year, even though the fourth quarter is considered a high season thanks to holidays like Christmas. But as Samsung will be competing head-to-head with Apple’s iPhone 6S, the company will see a sharp increase in marketing expenditures.

Investors are more interested in next year, as there are growing expectations that Samsung will unveil a smartphone that folds, the next stage in the evolution of the smartphone.

In the 1980s, mobile phones were like bricks, which changed when in the 1990s, mobile phones started to fold. Another change came in the 2000s when cameras appeared on phones, and finally by the full-touch smartphone in the 2010s. Changes in hardware created new markets.

Other smartphone manufacturers will likely introduce their own foldable smartphones as early as 2018. As a result, Samsung’s mobile phone business operating profits will expand from 10 trillion won this year to 11 trillion won in 2016.

Eugene Investment & Securities is betting the foldable smartphone by Samsung will make its appearance in the second quarter.

“A meaningful share price hike will happen when the company’s competitiveness is again proven with the introduction of the foldable display, which is innovative hardware,” said Lee Jung, a Eugene Investment & Securities analyst.