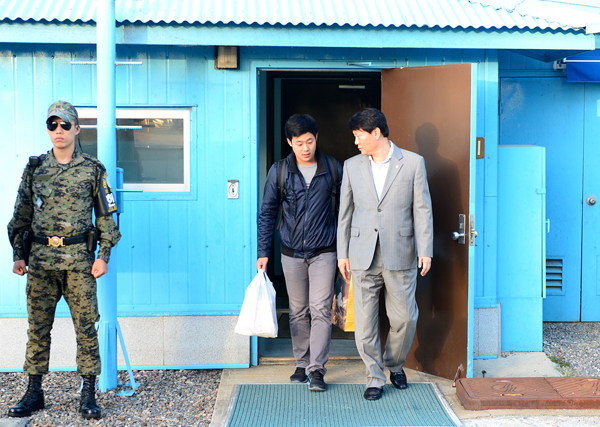 Joo Won-moon, center, a South Korean student at New York University, is escorted by a South Korean official into the South on Monday at the border village of Panmunjom. Joo’s return ended a five-month detainment in Pyongyang after he illegally entered North Korea by crossing the Yalu River from China in April. Provided by the Ministry of Unification

North Korea on Monday repatriated a South Korean student who had been detained for five months, an unexpected conciliatory gesture toward South Korea.

Joo Won-moon, a 21-year-old student at New York University and a U.S. green card holder, was handed over to South Korean authorities at the border village of Panmunjom at around 5:30 p.m. on Monday. Joo’s release followed a surprise announcement earlier in the day by the state-run Korean Central News Agency saying he would be freed. The announcement did not elaborate on what led it to the decision.

Joo crossed the Yalu River from China into North Korea in April and was arrested by North Korean guards. In an interview with CNN in May, he said he hoped his journey “could have a good effect in the relationship.”

Joo reappeared before cameras in a Sept. 25 press conference in Pyongyang, at which he read what was seen as a carefully drafted statement praising North Korea and denying international accusations that the Pyongyang regime was responsible for gross human rights violations.

He also called for a shift in the United States’ North Korea policy to engage the country more.

His return, demanded by Seoul since his arrest in April, raised speculation that Pyongyang is willing to improve relations with the South. South Korea has warned of consequences if the North fires a long-range rocket or conducts a fourth nuclear test to commemorate the 70th anniversary of the foundation of the Workers’ Party on Oct. 10, hinting it would pursue additional UN sanctions on the country.

Seoul welcomed the North’s release of Joo on Monday and called for the additional release of three South Koreans detained in the communist country, all of whom are accused by Pyongyang of illegal entry to undermine the regime.

Pyongyang was silent on the fates of the other three detained South Koreans on Monday. The trio were convicted of espionage and sentenced to a life sentence with hard labor by a North Korean court earlier this year.

Joo, a permanent U.S. resident who had been living in New Jersey, is expected to undergo questioning by the National Intelligence Service over his exact motive for his illegal entry into the North, which could be in violation of the country’s national security law that prohibits South Koreans from making a trip to the North or contact with North Koreans without prior government consent.