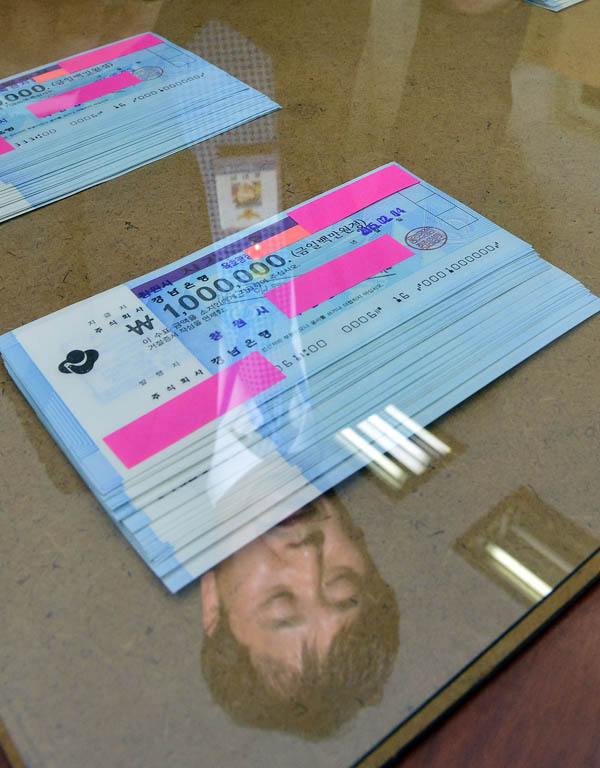 A 31-year-old man alleged on Monday to be the owner of checks worth 100 million won ($85,320) that were discovered in an envelope in the waste disposal area of Tower Palace in Dogok-dong, in Gangnam District, southern Seoul.

The Suseo Police Precinct announced the same day that one of the men living in the residential complex, an icon of wealth by Gangnam standards, had come to the precinct at 2 a.m. Monday to report that the money belonged to him.

According to authorities, the man claimed that the money belonged to his father, a businessman, who intended to use it to decorate the interior of a new house the family planned to move in to. He added that the funds had come from liquidating his father’s assets, and that the checks had been temporarily stored in a suitcase, which he believed the house cleaner later threw out by mistake.

The man said he reported to police as the owner of the checks because he had been instructed to by his father, currently away on a business trip to Japan.

For privacy purposes, CCTV cameras have not been installed in the trash disposal area, so it could not immediately be confirmed whether the man’s account was accurate.

The police questioned the 31-year-old in the early hours Monday morning, calling him back again at 8 a.m., and are currently working to source and verify the checks.

The checks - of which there are 100, made out for one million won each - were reportedly found to have been issued from four different banks across 12 branches nationwide. The issue dates for all the checks are all reported to have been made around August 2014. “Since there are 100 checks and the branches at which they were issued are numerous, it will take quite a while to confirm all the details,” one of the investigators explained.

The checks were discovered at 7:30 p.m. Friday by a 63-year-old cleaning lady at Tower Palace. She reported the money to police the next day.