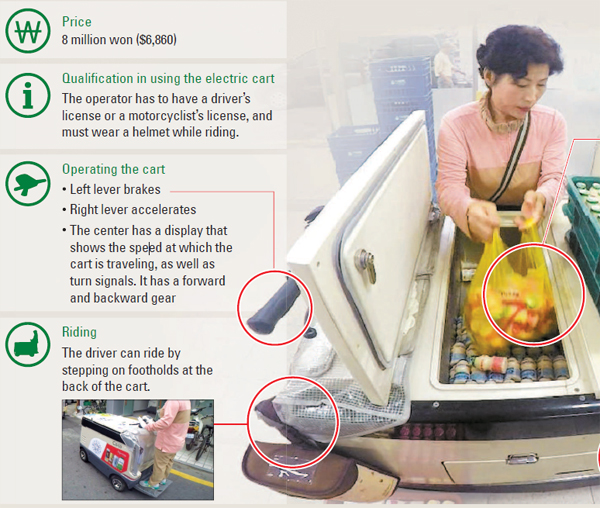 Getting an icy cold beverage from ubiquitous vending machines or convenience stores is easy to do these days, but it wasn’t back in the 1970s and ’80s, when refrigerators were considered a token of wealth.

Korea Yakult’s solution was hiring saleswomen for its newly released yogurt-based drinks to deliver the products while they were cold and fresh direct from the saleswomen’s insulated cooler bags.

The so-called Yakult ajumma (middle-aged woman) have since become staples of residential neighborhoods and office buildings. They wear a similar beige-and-pink uniform as they did in 1971, but last December, they received a modern addition.

Instead of a bag, the Yakult ajumma now use a special motorized cart, considered the world’s only motorized refrigerator.

“The delivery that took four hours in the past is completed within two to three hours easily,” said Lee Baek-ja, 65, who has been a Yakult ajumma for 22 years. “It is very convenient when compared to the old days when we had to carry [the products] in our bags.”

On a recent early morning at a Yakult delivery station in the Cheolsan branch of Gwangmyeong, Gyeonggi, there were 38 of the carts lined up in four rows. At 8 a.m., some 30 carts were placed on the road outside.

The Yakult ajumma can reach their destinations 2.5 kilometers (1.6 miles) away in just 20 minutes when they hit the maximum speed of 8 kilometers per hour - more than double their average walking speed.

Since the carts were adopted, they’ve seen their delivery time fall to two hours, from an average six to eight hours before. 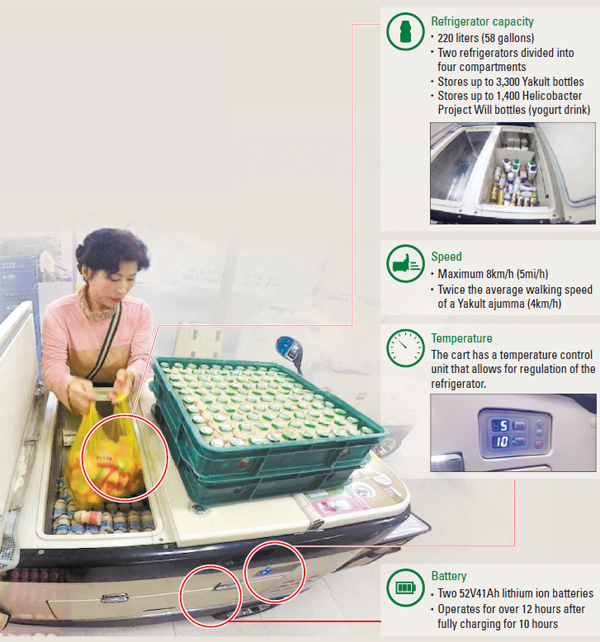 Although the motorized refrigerator isn’t exactly cutting-edge technology, it is the result of a collaboration between leading conglomerates and small and midsize companies, who combined existing technologies to make the life of the Yakult ajumma easier.

In October 2012, Korea Yakult Corporation decided to develop the electric cart at the request of their workers and started searching for companies that would build one.

The company made requests to refrigerator and golf cart manufacturers not only here in Korea but also outside the country. However, no companies stepped in.

“Our idea was to create an electric cart that a delivery person can ride on and has a built-in refrigerator,” said Kim Seung-young, a Yakult employee who participated in the development of the cart. “But many shook their heads, as it wasn’t easy since there weren’t such products on the market and they have never built one before.”

After months of trial and error, the plan was finalized in May 2014. LG Chem would supply the lithium ion battery cells, the same ones used in Renault Samsung Motors’ electric vehicles, while TS Company, which specializes in manufacturing battery packs, would create the modules for the cells.

Autech Carrier and Cais Electronics were tasked with developing the refrigerator.

The Korean small and midsize company Daechang Motors took charge of the final stage, where it would assemble the batteries and the refrigerators and put it into the carts that they developed.

Three months later, the first units were tested. Four units were sent on delivery routes that were especially long and included lots of steep slopes.

That first trial didn’t go so well; some of the Yakult ajumma complained that the refrigerator was too small and didn’t have enough storage compartments. Others said the battery didn’t last long enough and that the size of the footholds weren’t large enough to provide stability while going up a steep slope.

“There were some unexpected demands where they asked that the cart move much better on slopes,” said a company official. “In our trials, we made huge improvements.”

The carts underwent four more iterations, after which Yakult and the developers met more than once a week to discuss problems and how improvements should be made.

Another complaint from the Yakult ajumma had been about the batteries on the cart, which they feared would die during business hours.

As a result, the developers doubled the battery capacity from the previous single 52-volt, 41-Ah lithium ion battery pack. This helped the electric carts move for more than 12 consecutive hours on a full charge of 10 hours.

The battery was also installed at the bottom of the cart that, thanks to the battery’s heavy weight, increased the stability of the vehicle.

The refrigerator capacity was expanded from 200 liters (53 gallons) in the early stage to 220.

The compartment can store more than 3,300 Yakult bottles and roughly 1,400 bottles of the larger yogurt drink Helicobacter Project Will.

“On average, a single [Yakult] ajumma has 160 fixed clients that she is in charge of,” said Kim Geun-hyun of Korea Yakult Corporation. “But [the increased storage capacity] is a result of opinions that the ajumma should always be prepared for an unexpected bulk delivery or customers who wish to buy products on the spot.

“As 95 percent of our sales rely on the ajumma, we can’t be negligent of demands from the field.”

“We plan to add telecommunication systems on the electric carts and develop an app where customers will be alerted via their smartphones when the ajumma passes by,” said Han Dae-sung, head of public relations at Korea Yakult.

“The electric cart could be the foundation that turns our company in to a Internet of Things developer.”