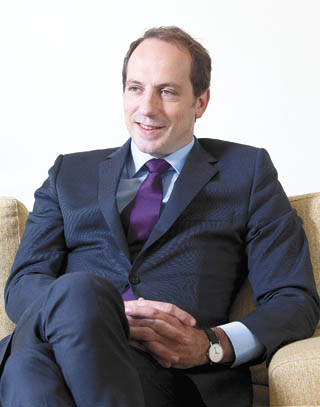 Ambassador of France to Seoul Fabien Penone By Park Sang-moon

French President Francois Hollande’s visit to Korea later this year “will be a new phase in our bilateral relationship,” said the new top French envoy to Seoul in a recent interview.

Ambassador of France to Korea Fabien Penone highlighted how the two countries will celebrate the 130th anniversary of diplomatic ties through a series of events and exchanges in culture, education, government and economics as he sat for an interview with the Korea JoongAng Daily on Friday at the ambassador’s residence in Seodaemun District, northwestern Seoul.

Hollande will visit Korea on the invitation of President Park Geun-hye “very soon,” said the 47-year-old diplomat, who was assigned to Seoul one month ago.

“The two presidents will set new strategic orientations for our bilateral cooperation and a new action plan will be adopted,” he elaborated. “The visit itself will be important to show from the highest French authorities the importance we, France and the French people, attach to the Koreans.”

On the political and economic side, he added, the visit of Hollande “will pave the way to new cooperation: the reinforcement of our political dialogue on diplomatic and global issues such as climate change and development; industrial partnerships and cross investments, supporting creative economy and start-ups, and tourism.”

The Blue House announced Monday that Hollande’s visit would take place on Nov. 3 and 4.

France-Korea Year officially kicked off in Paris on Sept. 18 during an official visit by Prime Minister Hwang Kyo-ahn.

“I had the honor to accompany your Prime Minister Hwang to Paris for his official visit. I think it was a very successful visit,” said Penone.

He said Hwang had in-depth discussions with President Hollande and Prime Minister Manuel Valls, as well as a “large range of meetings and opportunities to work and discover France, such as meetings with big universities, high schools and innovative French companies.”

The two sides were able to detail the priorities of the bilateral partnership and agreed to work together to deepen cooperation on the creative economy and innovation through Hwang’s visit.

“Now we are preparing the next stage, the visit of Fleur Pellerin, the minister for culture and communication, and a bit later, the visit of President Hollande,” he said.

Penone made his first trip to Busan last month and will accompany French Minister for Culture and Communication Pellerin on Friday for a visit to the ongoing Busan International Film Festival, which highlights French movies such as the award-winning 2015 film “L’Hermine,” directed by Christian Vincent.

“I was very pleased to be in the city because it’s one of the most dynamic cities in your country,” he said, adding one of his goals is to increase cooperation with Korea’s local governments and also in the areas of cinema and animated films. “The Busan International Film Festival is famous in Asia, in Europe and now worldwide because it is one of the major film festivals.”

Penone, who severed over 18 years in diplomatic service, previously served as a foreign policy advisor to Hollande.

Seoul is his first post as an ambassador, and he comes as France and Korea launch joint diplomatic and cultural projects.

This includes French shows, concerts and exhibitions that have never been seen before in Korea such as a novel collaboration between award-winning French dancer and choreographer Jose Montalvo and the National Dance Company of Korea.

“The French people know your manhwas (Korean comics), your food, your gastronomy well; Korea is already very present in France,” Penone pointed out. “There is a sharp increase in demand for the Korean language in our secondary schools.”

But through the France-Korea Year, he said, “We would have much more visibility to our bilateral relations, which will help the French people better discover your country and for your people to discover France.”

Penone also emphasized that Korea and France are major trade partners with more than 8 billions euros of trade in 2014.

“The trade volume between our countries has increased by 50% over the past 10 years, making Korea our third partner in Asia,” he added.

The two countries’ exports include a variety of products such as planes, machinery, and more recently, cosmetics.

“You’re very competitive and innovative in the field of electronic goods; the majority of the French people know the products of the big chaebols,” he said. “But your cosmetics are progressively becoming developed in France, and along with the movie industry, manhwas or comics, you’re covering many different sectors.

“You are more and more becoming a regional hub for setting new trends in the fashion industry, in the luxury field, so it is also important for our French companies in this field to be located here in Seoul to spot the new trends.”

He said, “Since 2011, the EU-Korea Free Trade Agreement has played a very positive role in our trade relations, as it has not only reduced trade barriers but also established a very constructive discussion framework.”

He especially lauded the last EU-Korea Trade Committee, which took place last September in Seoul in parallel with the EU-Korea Summit, which “illustrates the trust and positive energy put into expanding our trade ties.”

As a permanent member of UN Security Council, France is “taking very seriously any risks rising from North Korea,” said Penone who previously specialized in United Nations and European Union issues. In regards to possible North Korea provocations, he said, “If there are new tests, we will as permanent member of the Security Council, with the other members, react to this.”

Though Penone was posted in Seoul to replace former French Ambassador Jerome Pasquier on Sept. 7 and presented his credentials to President Park on Sept. 14, he has quickly adjusted to life in Seoul.

He is accompanied by his wife and four children, ranging in age from 14 to 1 and half. “My youngest daughter is in a Korean nursery -- she is the only French baby in this nursery,” he said.

He also enjoys Seorae Village, or “Little France” in Seocho District, southern Seoul. When he drops off his three older children at the French school there, he says he stops by the bakeries and describes the shops as “lively.”

“When they live abroad, French people like to be completely inserted into a city but also like to open French boutiques, which helps make the district become more lively,” he said.

Penone, whose favorite Korean food is bibimbap, said he hopes to visit southern Korea in the near future. “It is a dynamic region where several French companies, such as Renault, Total and Technip, have activities.”

As the new envoy to Seoul, he said, “We are good partners. The objective, the main goal, is to reinforce the human and personnel relationship between our people, to intensify people-to-people exchanges.”