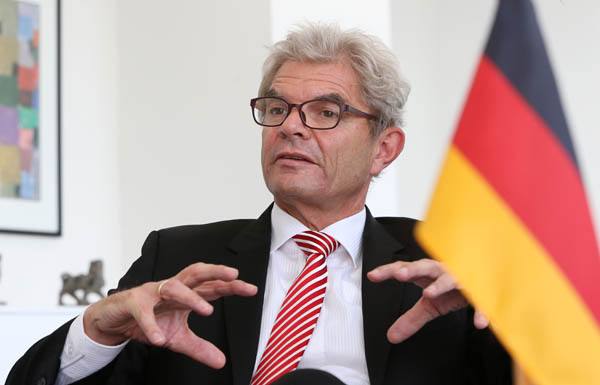 Germany’s top envoy to Seoul said the intensive structural reforms carried out after Germany’s unification in 1990 lent to its economic success.

“But while political unification has been achieved, economic unification is still in the process of being carried out,” said German Ambassador to Seoul Rolf Mafael as he sat down for an interview with the JoongAng Ilbo last Friday, as Germany celebrates the 25th anniversary of unification this year.

“Through economic cooperation with South Korea,” Mafael added, “the East Germany region was able to take its place as the center of the new German economy.”

The diplomat sat for the interview ahead of the visit of German President Joachim Gauck, who kicks off a four-day state visit to Seoul next week, which includes a summit with President Park Geun-hye.

Park, who met with Gauck during her state visit to Germany last year, will meet with the German president at the Blue House on Monday for talks to bolster bilateral cooperation and trade.

He will also attend an academic symposium Tuesday organized by the Alumninetzwerk Deutschland-Korea, or Adeko, also known as the German Korean Alumni Network, and sponsored by both countries’ governments.

Over 500 experts and officials from both countries will attend the 7th Joint Korean-German Conference at the Grand Hyatt Hotel in central Seoul. This year it has the theme “Science and Innovation.”

Mafael recounted his memories from the fall of the Berlin Wall, which helped pave way for the unification of East and West Germany, and also what lessons the German experience can provide for the Korean Peninsula’s vision for a peaceful unification.

Following are translated excerpts of the interview in German:

Q. What are the advantages that Germany earned through unification?

A. Every aspect, whether it be politics or economic, improved compared to the period of division. Such good fortune was possible because of our constant effort for 25 years after unification to overcome economic crisis. Germany was called “the sick man of Europe” in 2003. But through intense reforms and restructuring, represented by the Agenda 2010 [aimed at improving the German welfare system and labor relations], Germany was able to become an economic power.

I can say with confidence that German unification has been complete politically. German Chancellor Angela Merkel was the first chancellor from East Germany. The opinions of our people who live in the new federal states of Germany are plentifully reflected in the political system. While we cannot say that economic unity has been achieved yet, there has been considerable progress. Labor productivity of the former East German regions has caught up to 70 to 80 percent of the gross national income per capita.

German unification policy provides a lot of lessons for Korea.

German President Joachim Gauck, who will be in Korea on a state visit from Nov. 11 to 14 on President Park Geun-hye‘s invitation, will emphasize unification. President Gauck, through his summit with President Park and address to the National Assembly, will refer to the German unification and Korea’s peaceful unification process. He will also visit [the inter-Korean truce village of] Panmunjom and Dorasan Station [the northernmost stop on South Korea’s Gyeongui railway line] to highlight the unification issue.

You have had experience working on the German unification process. Do you have any specific recollections from that time?

How do you assess the growing scale of economic cooperation between South Korea and Germany?

Korea and Germany’s bilateral trade volume in 2002 was 9.7 billion euros, which grew by threefold to 26 billion euros in 2014. Samsung Electronics in 2013 acquired Dresden-based Novaled AG, a provider of OLED technologies and materials, and in 2012, Hanhwa Group bought Q Cells, a German photovoltaics provider.

What sort of technical cooperation is happening between the two countries on a civilian level?

Since 2009, Korea and Germany have held the Joint Korean-German Conference every year. It is organized by the two countries’ network of companies, diplomats and scholars, ADeKo, and other institutes including the German National Academy of Sciences Leopoldina. From the first session, we have had interest in the fields of natural science and technology. The 7th joint conference that kicks off Tuesday will introduce Germany’s Industry 4.0 project [a fourth industrial revolution vision for the future of manufacturing]. Asides from this, the two countries’ institutes have 150 joint research projects currently.