Chung lashes out at FIFA over 6-year ban

Chung lashes out at FIFA over 6-year ban 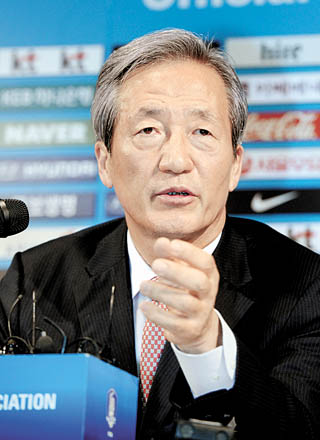 Former FIFA Vice President Chung Mong-joon vowed Friday to explore every possible option to nullify the decision reached by the organization’s ethics committee to ban him for six years from all football-related activities.

Chung, who was considering a run for the FIFA presidency, further referred to the international governing body as a “sinking Titanic,” and claimed the decision was nothing more than an “act of retribution” for his long-held criticisms against FIFA.

“To correct the unjust decision by the committee, I will employ all legal means, such as appealing the case to the Court of Arbitration for Sport,” he said Friday in a harshly worded statement.

“I will take relative legal measures against the FIFA ethics committee, which has defamed me with its unjust decision,” Chung continued, threatening legal action against FIFA President Joseph “Sepp” Blatter over accusations waged against Blatter of embezzlement and breach of trust.

Chung, a major shareholder of Hyundai Heavy Industries, also expressed his frustration at what he said was the absence of fairness in the decision, noting that his six-year ban and $103,000 fine was a much heavier penalty than the punishments doled out to Blatter and Vice President Michael Plantini.

They were given much more lenient penalties - both were provisionally suspended for 90 days - “despite detailed bribery suspicions” against them, he said.

Platinti had also been campaigning for FIFA’s presidency.

Their suspensions cannot be extended for more than 45 days.

The global sport body on Thursday delivered what was seen as a surprisingly harsh punishment against Chung after its ethics committee found him guilty of violating five articles in the organization’s code of conduct during the bidding process for the 2018 and 2022 World Cup tournaments.

It was earlier reported that FIFA’s ethics committee was looking into donations Chung made to Pakistan and Haiti in 2010, suspecting that they were made in return for securing Korea’s bid for the 2022 World Cup. Chung refuted the accusation, however, claiming it was a charitable donation to a disaster relief fund.

It also had concerns with a 2010 proposal written by Chung to FIFA members suggesting the creation of a global football development fund worth $777 million. FIFA did not disclose details of its decision Thursday.

FIFA also suspended Secretary General Jerome Valcke, who had already been on disciplinary leave for 90 days.

Chung’s sentence has since raised questions over the fairness or the ethics committee’s ruling.

Chung took a shot at the softer measures levied on the trio, claiming that the reason he was given a much heavier punishment was because of his open disapproval of the way Blatter has run the organization and his insistence that the body be reformed.

He added that the decision was merely designed to disrupt his bid for the FIFA presidency without the means to back up accusations against him.

On Tuesday, Chung said that the ethics committee was a “hitman” for Blatter and that the corruption investigation was just part of a bigger plan to prevent him from registering as a presidential candidate by slapping him with an “unreasonable” suspension.

The election is set for Feb. 26, and those seeking to replace Blatter must be nominated by Oct. 26.

Blatter is currently being targeted by Swiss and U.S. authorities over a corruption scandal.