The murder of Park and return of his remains

The murder of Park and return of his remains 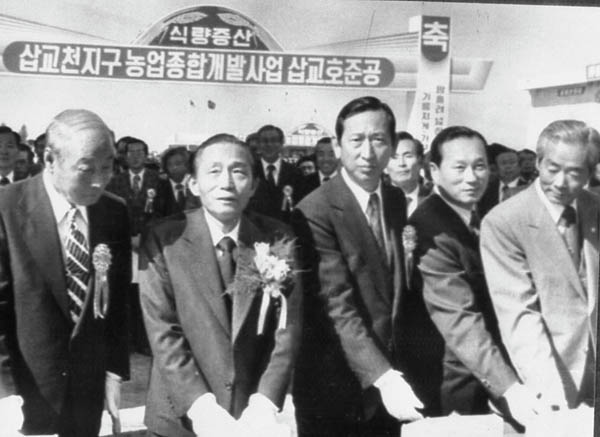 President Park Chung Hee, second from left, presses a button to open the gate of a seawall of the Sapgyo Stream in Asan, South Chungcheong, on Oct. 26, 1979. It was his last public event. He was fatally shot later that day by Korean Central Intelligence Agency Director Kim Jae-gyu. [JoongAng Photo]

At this time, Park’s day began with a briefing by Cha. Chief Presidential Secretary Kim Gye-won and KCIA Director Kim Jae-gyu could talk to the president afterward.

As Cha was always up first, KCIA Director Kim couldn’ get a leg up on Cha. Cha often brought up ideas, Park gave directions and Kim would follow through on the orders. If Kim did good job, Cha got the credit. Of course, if anything went awry, Kim was held responsible. 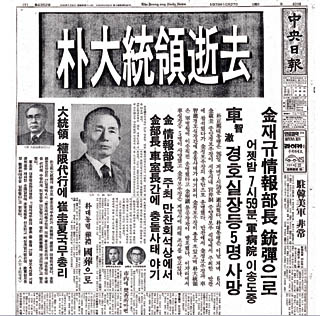 The front page of the JoongAng Ilbo on Oct. 27, 1979 reports on the assassination of President Park Chung Hee. [JoongAng Photo]

On Oct. 25, 1979, in a meeting called to discuss the demonstrations, Park scolded Kim.

“What is the KCIA director doing?” he asked. “You failed both in intelligence activities and your initial response.”

Kim Jae-gyu told Chief Presidential Secretary Kim, “This is all the work of Cha and I’m going to do something.”

On Oct. 26, I was having dinner with presidents of media companies at a restaurant in Hannam, central Seoul. Some of them talked about an event earlier that day that Park attended. It was a celebration of the completion of construction of a seawall at the end of Sapgyo Stream in Asan, South Chungcheong.

Agriculture Minister Lee Hee-il, who escorted the president on the helicopter to visit the seawall, said Park looked as happy as a kid on a picnic and he seemed to have forgotten the demonstrations.

The first task Park took on after the May 16 revolution, or coup, in 1961 was to get end borit gogae, the time of year when people ran out of rice and have to live on barley. He understood the pain of hunger as the son of a poor farmer. That was why he liked building dams and developing new types of rice.

He delivered his last speech at the seawall on Oct. 26.

“Land development is the driving force of national power,” he said. “The seawall around Sapgyo Stream will provide a better life for farmers and prevent floods and droughts.”

As I dined with the media company presidents, one of the guests said a weird thing.

“Today, three helicopters carrying the president and his aides landed in the yard of Dogo Hotel in Asan,” he said. “The landing surprised a pregnant deer and it died after being hit by a rear propeller of one of the choppers.”

This gave me an ominous feeling. Then Police Chief Son Dal-yong called me.

“The Blue House doesn’t look normal,” he said. “It looks like something happened and I think you should go.”

“Did North Korea send another spy to the Blue House?” I asked.

“I don’t think so,” he said, “but the atmosphere there is strange.”

When I arrived home, I got another phone call from Park Seung-kyu, senior advisor to the president on civil affairs.

“Where have you been? Please come as soon as possible,” he said. I could hear him sobbing.

When I asked what happened, he just said, “The President seems to have been killed.”

I arrived at the Blue House around 10 p.m. and there was no security guard at the entrance. It reminded me of the May 16 revolution. When the revolutionary army went into Army Headquarters, no military police were there because they ran away.

I was certain something serious had happened. The bodyguards, who swore allegiance to the president, probably ran away in fear of rioters with guns when they heard the president was killed.

Senior Advisor Park greeted me and said, “They say the president was fatally shot at a dinner with Kim Gye-won, Kim Jae-gyu and Cha Ji-cheol.” He said he heard that from Chief Presidential Secretary Kim Gye-won. Park didn’t know precisely what happened.

At around 3 a.m., I was in a small room on the first floor of the Blue House that the late First Lady Yuk Young-soo used to receive guests. The room was rarely used after Yuk was killed in 1974. Two tables were placed next to each other and were covered with a white sheet.

President Park’s daughter Geun-hye, who’s Korea’s current president, went to the Armed Forces Seoul Hospital to bring Park’s body back to the Blue House. The body was delivered in an ambulance. I directed the body to be placed on the tables.

Park, who was only five-foot-one, was shot twice in the chest and behind his right ear. It was seven hours after he was killed. The wound in the back of his head was still leaking and Geun-hye wiped it with a white towel.

I took a closer look at the body. The eyes were closed and his lips were dark. His face looked calm and clean. Except for the gunshot wound behind his ear, Park looked just the same as when I saw him last, nine days before. But he looked like a small child. I never felt Park was that small when he was alive. His death was unreal to me.

I was suddenly reminded of the dead body of John F. Kennedy. I don’t know why I thought of that. Perhaps because Park’s body seemed so unreal to me. Theodore Sorensen, a speechwriter of Kennedy’s, looked at his body as it was taken to a hospital in Dallas, Texas, and said, “I never imagined him so big, even bigger than the bed. He was such a giant.” Kennedy was six feet tall.

Park and Kennedy were both born in 1917. Park met Kennedy in the United States on Nov. 14, 1961 when he was chairman of the Supreme Council for National Reconstruction.

I heard about Kennedy’s assassination in Buyeo, South Chungcheong, which I represented as a lawmaker. I called Park and said, “Mr. President, we’d better go to the funeral.” Park replied, “I was mulling over it. Ok, let’s go.”

Presidents and high-ranking government officials around the globe were there, and Park walked with French President Charles de Gaulle, who’s six-foot-five, and the difference in their heights was impressive.

The feeling I had was quite different from that of Sorensen when he looked at Kennedy’s body. Park was always a giant in my mind. But his body looked unbelievably small that day. He had big shadow, but the body looked light without his soul.