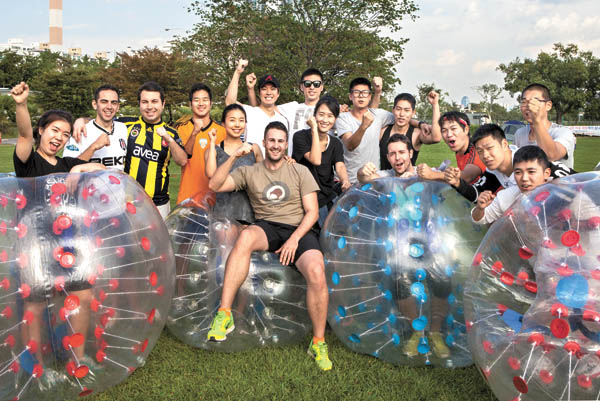 Members of Bubble Soccer Korea gather at the riverside park in Ichon, central Seoul, on a sunny Saturday in September. By Park Sang-moon

On a sunny Saturday in September, about 15 people in sportswear started to arrive at the riverside park in Ichon, central Seoul.

On the grass, dozens of disc cones had been placed on the ground to mark the playing field and two pop-up goals set up on either end.

The players greeted each other and started to warm up.

But most surprising were the huge inflatable plastic balls on the field, known as zorbs, essential props for the match hosted by Bubble Soccer Korea. 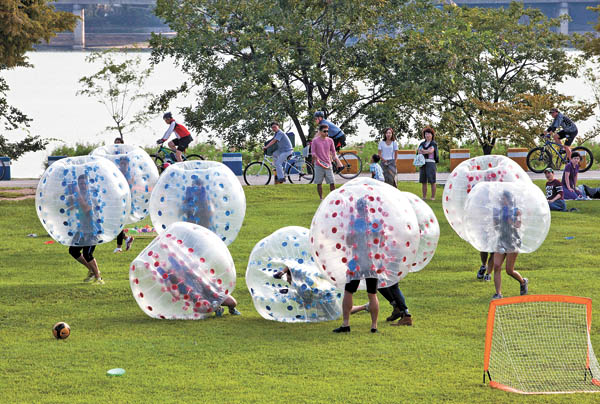 Bubble soccer, also known as zorb football or bubble football, is game in which participants play soccer while encased in a bubble-shaped suit, or zorb. Each zorb has a built-in harness and handles for safety, and players are encouraged to bump into each other during play. Falling down and standing up again is a huge part of the game.

After appearing on a Norwegian TV show, the activity has become popular in other countries including Korea. Here, it’s been featured on a few television shows, including “Infinite Challenge,” “Let’s Go Dream Team” and JTBC’s “Non-Summit.”

The organizers of Bubble Soccer Korea, Ahn Baek-san and Lee Dong-uk, started by gathering the participants and distributing a sheet of paper to each player that stated the rules of the game and other guidelines in either Korean or English.

“Most of the rules are similar to regular soccer,” Ahn said. “The bubble suits are designed to bump and bounce, so hustle up. But please don’t try to tackle from behind.”

Each game lasted for 10 minutes. Teams 2 and Team 3 were selected to play first through a game of rock-paper-scissors.

The teams lined up at each end of the playing field and rushed toward the center as the referee dropped the ball, bumping their opponents as hard as possible to take possession. Some rolled as far as 5 meters (16 feet) after being tackled.

For many, it was their first time playing bubble soccer, and those who quickly got the hang of it led the game - that’s how the first goal of the day was scored.

When the game resumed from Team 2’s side, the ball was passed to another player in the front when a member of Team 3 suddenly approached, bouncing out a Team 2 participant and kicking the ball in the goal.

Other goals were accidental. Close to the end of the first game, Jordi, 33, from Team 2, kicked the ball from the back, sending it straight into the goal.

“When I scored the goal, I didn’t see it because one of my friends tackled from the front, but I knew it when I heard screaming,” Jordi said. “I feel good because we were losing and I tied the game.”

The game ended 1:1, with Team 3 winning the via another rock-paper-scissors match.

There were four other games that day. Team 3 won three of them to win the event and received coupons, with which they can bring a friend for free next time.

Participants say bubble soccer is much more physically demanding than what it looks like. When players took off their zorbs after the game, many were covered in sweat.

The guideline distributed to players advises them to stay hydrated. Organizers also allow 10 to 20 minute breaks between games so players can catch their breath.

“It’s exhausting,” Jordi said. “It’s fun but so tiring at the same time; I didn’t stop laughing the whole time.”

“I didn’t think it would be this physically demanding a sport,” said another participant, Woo Ji-yeon. “But I like working out and it’s a good sport for me as well. It’s fun, too.”

Meanwhile, other players prepared water balloons and to throw at one another during the breaks.

Match days allow Koreans and foreign residents to socialize through sports, making it easy to interact even if they don’t speak each other’s language.

“I learned this from a Facebook page,” said a Korean player, who identified himself as David. “I don’t speak English, but we don’t need language here, and it’s still fun and has a lot of enjoyable elements. I’m really thinking of coming back again next time.”

Bubble Soccer Korea is a relatively new outlet for bubble soccer. The group opened its homepage, bubblesoccer.kr/, on May 17.

But bubble soccer isn’t totally new in Korea. The two 27-year-old organizers, who attended elementary school together, say they just wanted to provide bubble soccer equipment for a cheaper price.

“There are other bubble soccer operators, but they mostly rent props on a daily basis and it costs too much,” Ahn said. “So we’re accepting 12,900 won ($11.30) per person for the match, and we also renting them on an hourly basis.”

The duo also has a Facebook page dedicated to their service, and gathers participants for games at http://meetup.com/.

“We individually accept applications, make teams and appoint leaders so that they can enjoy the game,” Lee said. “Our main purpose is to make it friendly, and [players] often have lunch or dinner together or make wagers for beer.”

The organizers also emphasized that bubble soccer is a very safe sport.

“What’s good about bubble soccer is that nobody can get seriously injured,” Lee said. “Today, a player needed a Band-Aid, and that was the most serious injury so far. But we bring a first-aid kit and we sometimes use sports spray because players can potentially sprain their ankles.”