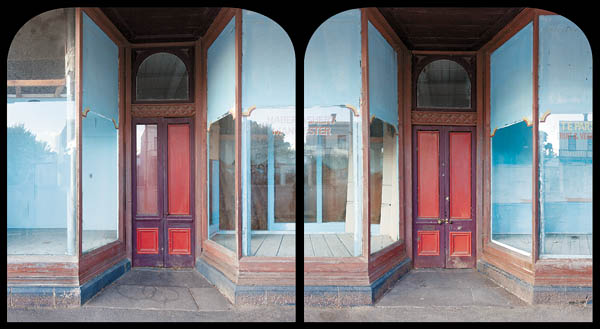 In homage to George Rose, who took iconic photos of old Korea in 1904, famous Korean photographer Koo Bohnchang took a series of landscapes in Clunes, Rose’s Australian hometown, in the style of stereoscopic images. “43 Fraser Street, Clunes,” , is one such photo. [KF Gallery]

Many Koreans don’t know that some of the most valuable documentary photographs of old Korea before the Japanese colonial era (1910-45) - including the famous image of Sungnyemun (commonly known as Namdaemun) - were taken by an Australian photographer named George Rose (1861-1942).

And even fewer people know that most of the photos were taken in pairs for stereoscopic viewing. But now visitors to the KF Gallery in central Seoul can see the images and learn what stereoscopy is by trying out a binoculars-like stereoscope that Rose left behind and a pile of cards, each of which bears two photographs that Rose took.

The two photos look almost identical but were actually taken about 7 centimeters (3 inches) apart, roughly corresponding to the space between one’s eyes. When looked at through the stereoscope, the pair of pictures appear as a single photo with the illusion of depth.

Australian contemporary photographer William Yang’s photos of Korea, including “Hanok Village, Jeonju,”, are also part of the “In the Spirit of George Rose” exhibition on view at KF Gallery in Seoul until Tuesday. [KF Gallery]

“Stereoscopy was popular among Westerners of that time, in particular those who desired to travel abroad but couldn’t afford to do so,” Koo Bohnchang, a famous Korean photographer, told the Korea JoongAng Daily at the gallery operated by the state-run Korea Foundation on Wednesday. He participated in the exhibition, titled “In the Spirit of George Rose.”

Koo’s photos have the calm and meditative quality that is his signature style.

The show features Rose’s works, Koo’s photos of street scenes and people in Clunes - a small town in Victoria, southeastern Australia - and photos of landscapes and people in Korea by contemporary Australian photographer William Yang.

According to Catherine Croll, the founding director of Cultural Partnerships Australia and curator of the show, the exhibition started from an interesting coincidence. 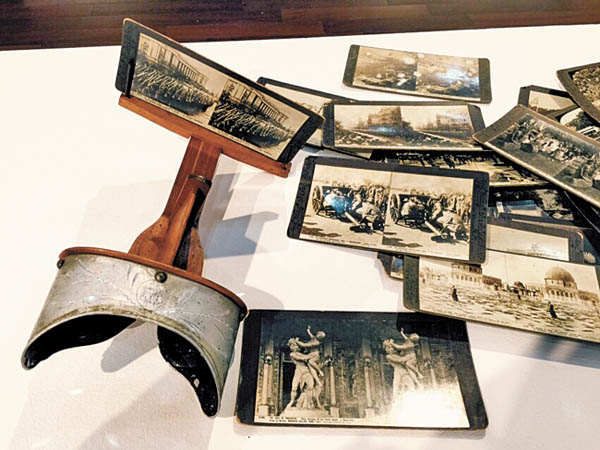 Moon So-young. A binoculars-like stereoscope and a pile of cards, each of which shows two pictures taken 7 centimeters (3 inches) apart.

A few years ago, she visited a book festival in Paju, a city northwest of Seoul in Gyeonggi, which is known for its publishing town. She accompanied a group from Clunes, which was once a gold-mining town and is now known for its book festival. Korean people in Paju told the group that an Australian who took important photos of Korea was from Clunes. This led Croll to plan an exhibition of Rose’s work.

“Then, I searched for a Korean photographer who would take pictures of Clunes - someone interested in people ... someone who can capture the spirit of the place,” she said. “I finally found Koo.”

In another coincidence, Koo supervised the editing of a book of Rose’s Korea photos in 2004.

The exhibition runs through Tuesday. Admission is free. Hours are 11 a.m. to 8 p.m. The gallery is closed on Sunday. The gallery is located on the second floor of the Mirae Asset Center1 Building. Go to Euljiro 1-ga Station, exit No. 3. For more information, visit www.kf.or.kr or call (02) 2151-6520.