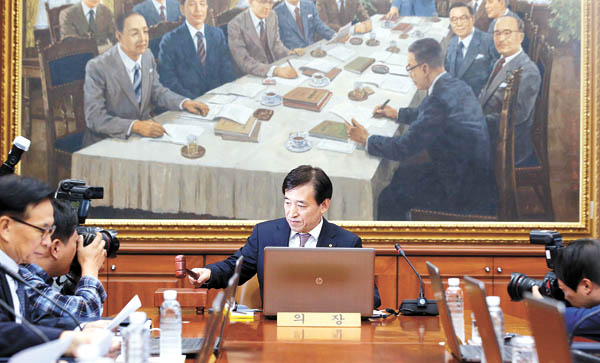 Bank of Korea Governor Lee Ju-yeol hands down the key rate decision at the monthly monetary policy meeting at the BOK headquarters on Thursday. NEWSIS

The Bank of Korea (BOK) kept the key interest rate unchanged for a fourth consecutive month Thursday as it weighed both internal and external risks, cutting down its forecasts for the country’s economic growth fractionally for both this year and next year.

The central bank decided to keep the repurchase rate steady at the record low of 1.5 percent as it continued to see weakness in emerging economies despite steady improvements in developed economics such as the United States and eurozone.

“We made adjustments because the second quarter’s quarter-on-quarter growth rate of 0.3 percent was weaker than the 0.4 percent we had expected,” said BOK Governor Lee Ju-yeol during a media briefing.

Looking ahead to next year, Lee said he was more concerned about external risks than internal ones, citing slowdown in emerging economies including China, potential financial market instability following a U.S. interest rate hike, and volatility in commodities prices.

“The BOK will probably keep the rate steady during the remainder of this year,” said Lim Hee-jeong, an economist at the Hyundai Research Institute.

“The U.S. rate hike, while somewhat delayed, is bound to happen. And the BOK will closely monitor both internal and external developments before making a decision about which direction it will take,” she added.

Despite the downward revisions in growth forecasts, Lee stressed that he did not expect Korea’s economic growth rate to fall below 3 percent in 2016.

Domestic activity was picking up, thanks to a revival in spending and investments.

“Domestic spending is expected to see steady improvements on the back of increases in nominal wages and the number of newly hired individuals - households’ purchasing power appears to be on the rise,” the BOK said in a statement.

The central bank expected consumer spending to rise 1.8 percent year on year this year, and facility investments to increase by 5.7 percent, up 0.3 percentage points from its July forecast of 5.4 percent.

Construction-related investments were also seen rising 4.6 percent, up by a full percentage point from the previous forecast’s 3.6 percent.

The BOK however remained cautiously optimistic.

“While the economy will continue to be helped by recovering domestic demand, we think there are many uncertainties in our path,” the BOK said in a statement.

An exports slowdown was cited as a factor that was likely to continue holding back the economy.

The inflation rate was seen cooling with consumer price growth coming in at 0.7 percent for this year and 1.7 percent for next year, down from July’s forecast of 0.9 percent and 1.8 percent, respectively.