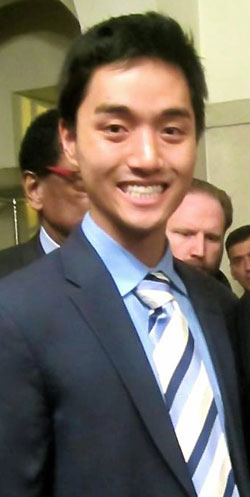 Harvard University student Joseph Choe made waves on the U.S. presidential campaign trail earlier this week when he took the initiative to challenge Republican candidate Donald Trump at an event Monday in New Hampshire.

A 20-year-old Korean-American said that he wanted to “make it known” that Trump’s comments regarding the defense alliance between South Korea and the United States were “wrong.”

The celebrity businessman has repeatedly claimed that South Korea relies on U.S. military support while paying nothing in return.

Choe’s question was initially refused by an event organizer because it wasn’t deemed interesting enough. Nonetheless, during the question and answer session, he ran toward the stage with his hand raised.

“Do you have a mic, guy?” Trump asked, pointing to him to give him an opportunity to speak. “Go ahead. Shout it out.”

Choe thanked the Republican candidate for attending the conference before saying, “Basically you said that South Korea takes advantage of the United States in terms of the defense spending on the Korean Peninsula. … You said that they don’t pay anything. However, I just wanted to get the facts straight.”

“Are you from South Korea?” Trump interrupted.

“I’m not. I was born in Texas, raised in Colorado,” Choe replied, to cheers from the audience.

“No matter where I’m from,” he continued, “I would like to get my facts straight. And I wanted to tell you that that’s not true. South Korea paid $861 million…”

A video clip from the conference then showed an event organizer hurriedly taking away the microphone from Choe.

Trump is an influential person, and his supporters believe what he says, he added. “I just wanted to set facts straight.”

The Harvard University economics major said that he originally intended to bring up the fact that Washington has geopolitical interests in East Asia, making the alliance with South Korea highly important to the United States.