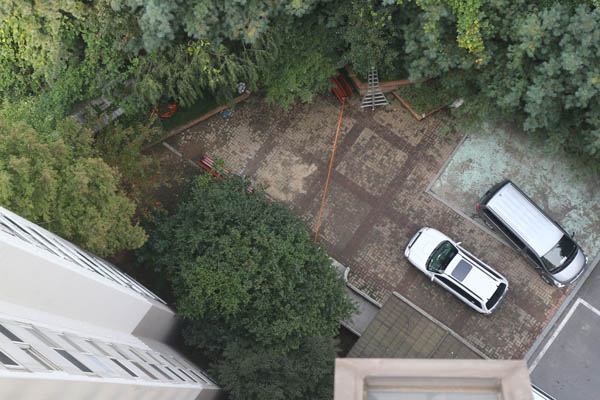 The view from the rooftop of an apartment building in Yongin, Gyeonggi, where a woman was killed by a thrown brick. Trees obscure the view of the pavement. SHIN IN-SEOP

A 9-year-old fourth grader confessed to dropping a brick that killed a 55-year-old cat lover, nicknamed “Cat Mom” by the online community and press, and wounded her friend.

But police said the boy and two friends dropped the brick off the roof of an apartment building in Yongin, Gyeonggi, without knowing there were any people on the ground below. Tree branches obscured their view.

Police investigating the “Cat Mom” case were without suspects or clues Thursday, a week after the fatal Oct. 8 accident, which occurred when the victim and her 29-year old friend were building a makeshift shelter for stray cats outside the apartment building.

“After identifying the suspect and another 11-year-old boy, we visited the suspect’s apartment Thursday night and confirmed that the suspect’s footprint matches the ones on the roof,” said Choi Gwan-seok, head of the precinct’s criminal department. “The suspect confessed that he threw the brick.”

They were not found in the initial investigation because the police concentrated on security camera footage from the side of the apartment where the victims were found. In fact, the three boys went up to the roof of the apartment building using an elevator on the other side.

The 9-year-old suspect said they were practicing a law of physics that they learned in school that says objects of different masses fall at the same speed.

“For the experiment, the suspect said that he dropped the brick and timed its descent in seconds,” Choi said. “It turned out that the suspect went up to roofs of other apartment buildings three times for the same experiment.”

The police believe the suspect met the two other boys at a playground and brought them up to the roof. They dropped small stones and tree branches before the suspect threw the brick 20 centimeters (8 inches) in length and 10 centimeters in width, the police said.

According to police, the suspect claimed he did not know people were hit by the brick, but the police believe he was aware. The 11-year-old who was at the scene told police he heard a shriek and told the suspect about it.

The boys saw on TV that the police had launched an investigation, but they did not tell their parents about their involvement, the police said.

The 9-year-old suspect, however, isn’t expected to be charged. Criminal law stipulates that minors under 14 have no criminal responsibility.

The police identified the suspect and one of the boys at the scene on Thursday. The other boy was identified on Friday.

“We are continuing our investigation because the statements of the two boys are not identical,” said Koh Gi-cheol, criminal division chief of the Gyeonggi Provincial Police Agency, on Friday. “We found the other boy today and he is believed to have met the two other boys for the first time on the day of the incident.”

After the police made the case public on Monday, it was believed to be a hate crime by a person who dislikes stray cats and people who try to help them.

Neighbors told the police that the victims used to feed stray cats from time to time and had no problem with residents. But the case started an online debate between cat-lovers and people who dislike stray cats.