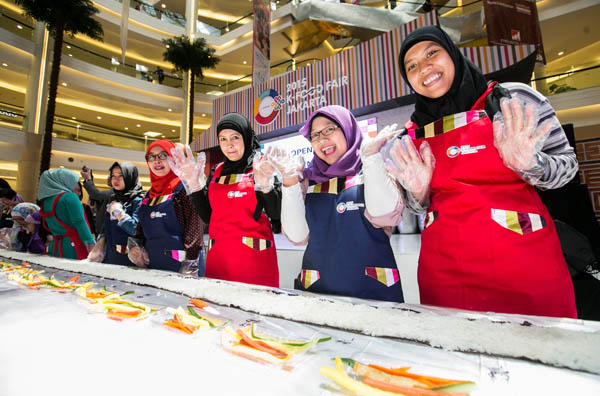 Indonesians pose before making a gigantic gimbap, or rice roll, that is as long as 42 meters, as part of the “2015 K-Food Fair Jakarta” event at the Kota Kasablanka Shopping Mall for B2C in Jakarta on Saturday. Korea and Indonesia celebrate the 42nd anniversary of their diplomatic ties this year. [NEWSIS]

The Ministry of Agriculture, Food and Rural Affairs and Korea Agro-Fisheries and Food Trade Corporation have jointly held a three-day exhibition in Indonesia to promote Korean food.

A total of 19 Korean food exporters participated in the event with three goals: setting a platform to expand market share in Indonesia, building up a strategy for buyers and upgrading the branding of Korean food as premium dishes.

On Friday, the opening day of the exhibition, the Korean government arranged one-on-one meetings between Korean exporters and Indonesian importers with translation services, giving the Korean side a rare chance to have in-depth conversation with potential buyers.

A total of 19 Korean food exporters in various sectors attended the meetings.

Roughly 100 people gathered at the “K-food Halal Seminar,” where local Indonesian officials introduced their certification system as well as registration procedures and labeling policy on foreign foods. Indonesia has a Muslim population of 230 million, the largest for a single country.

A large-scale cultural show, dubbed “K-food Reception,” was held in the evening. A B-boy hip hop performance, celebratory speeches, and awards ceremony for Indonesian buyers entertained about 100 visitors including some VIP guests.

Events over the weekend will center on amusing ordinary Indonesian people, giving them chances to experience plenty of cultural events as well as food taste-testing shows, from 10 a.m. to 8 p.m.