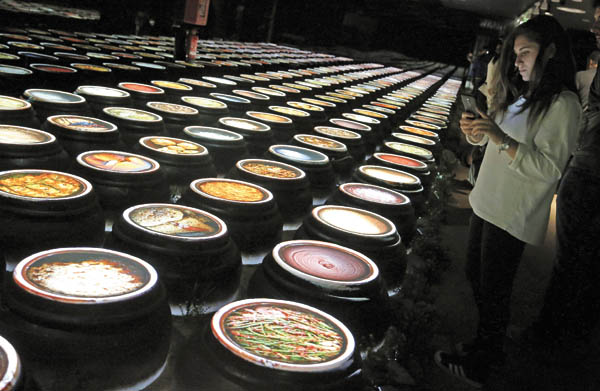 Media art installation involving images of foods projected onto traditional earthenware pots at the Korea Pavilion at this year’s Milan Expo, right, both combine Korean craft and contemporary art in an effort to appeal to the global audiences of today. [NEWSIS]

Hallyu, or the Korean Wave, has spread K-pop and K-dramas across the world over the past decade. This wave has helped spread Korean culture abroad and put Korea on the map for many foreigners.

However, the movement has been somewhat limited to the pop culture genres and the highly saturated market of K-pop idols, and experts say it has been slowly declining since 2013, noting that the country lacks a long-term strategy for promoting its culture abroad. Private companies, nonprofit organizations and the government have been working to expand more cultural phenomena abroad, including K-beauty, K-food and K-fashion.

But while there have been some positive results, the ripples are too small to keep the wave going.

It’s clear a better approach is needed, and leaders in the arts and culture scene say “convergence” is the key.

The Park Geun-hye government has been pushing a project to create a “Culture and Creativity Fusion Belt” by 2017, emphasizing that “the cultural industry is the essence of the nation’s future growth.” The project includes establishing a new culture and creativity fusion center that combines art and ICT.

But what cultural experts have in mind is to start off by converging different genres of art in order to reach a broader audience, while building on already popular culture as a way to promote relatively unknown genres.

One organization that has been particularly committed to the concept of convergence is the Arumjigi Culture Keepers Foundation, a nonprofit dedicated to promoting traditional Korean culture.

The beverages and dishes are presented like modern artworks, with sleek design pieces that look like they belong in a high-end art gallery or department store.

Kim Hye-jin of Arumjigi’s culture planning team said that people tend to think of traditional practices as old or difficult, so they deliberated on ways to make the show more attractive. “That’s how we thought of introducing pretty and sophisticated chinaware that people would feel the urge to purchase and keep in their dining rooms.”

Besides introducing 10 types of traditional alcoholic beverages, the show has also recreated, with the help of traditional Korean food experts, the accompanying anju, or side dishes that are enjoyed with drinks. At the same time, the traditional drink and food experts collaborated with traditional craft artisans and contemporary ceramics designers to create the most appropriate - and beautiful - bottles, cups and plates.

The exhibition, which runs until Oct. 30, is Arumjigi’s 12th exhibition. The foundation has always operated this way, suggesting a whole new way to promote Korean culture. 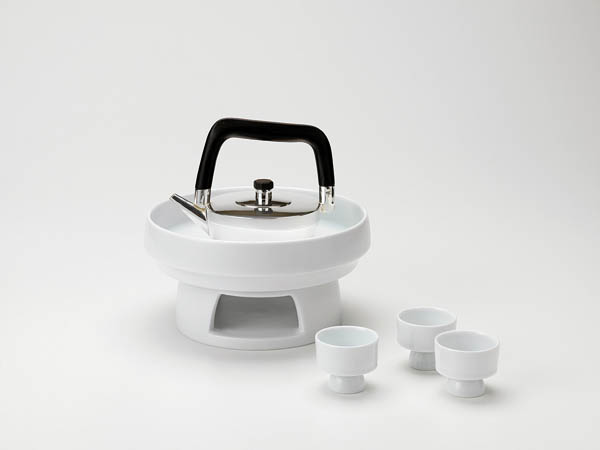 A ceramic and stainless steel kettle and cup set by Kang Woong-ki on display at the Arumjigi Culture Keepers Foundation headquarters in Seoul. [ARUMJIGI]

Such convergence projects, when taken abroad, have received enthusiastic responses, with a prime example being the Korea Pavilion at this year’s Milan Expo. The six-month long expo, which kicked off in May, is approaching its end, but the hype at the Korea Pavilion is said to still be at its peak. The Ministry of Culture, Sports and Tourism said it surpassed two million visitors as of Oct. 7 and expects to see more than 2.3 million by the Oct. 31 finale.

The pavilion is supposed to promote Korean food culture, but the government took the opportunity to show off Korean crafts, as well as music and media art. An average of 18,000 visitors per day were especially drawn to the media installation involving images of traditional Korean foods projected onto 365 earthenware pots, or onggi, to the beat of a K-pop song.

Another example of cultural convergence was the recent exhibition put together by K-pop singer G-Dragon and various fine artists, titled “PEACEMINUSONE: Beyond the Stage.” Contemporary artists from Korea and abroad created works inspired by the music icon and exhibited them along with art collected by G-Dragon at the Seoul Museum of Art.

The exhibition, which ran from June to August, was “an attempt to create a higher point of contact for high culture with the public and draw attention to contemporary art,” said the curator, Shin Eun-jin. YG Entertainment, G-Dragon’s agency, is planning to take the exhibition to foreign cities such as Shanghai and Singapore in the near future.

The center said it set the contemporary dance performance to a well-known piece of classical music in order to appeal to a wider audience, including an international audience.

However, converging multiple forms of art can be challenging. Dancer Yoon Jeon-il, one of the seven performers, said it was difficult for him to dance to the music, as he doesn’t have “the ability to interpret music.”

This was mostly true for the rest of the dancers as well, which performing arts critic Kang Icc-mo, who is also a professor of culture and arts at Seoul Digital University, said is problematic.

“I was curious to know how much dancers understood the music before expressing it with their bodies, but it seems like they couldn’t,” he said, stressing the importance of educating artists in diverse genres.

“We also have to look at why we have an increasing number of convergence in the field of culture and arts,” Kang added. “It’s because the government is providing financial support for this kind of performance, and as long as there’s money there, there will be performances. So if they are going to continue to do it, they should do it right.”


More than a hot topic

Fortunately, the Korea National University of Arts (K-Arts) may have a solution. 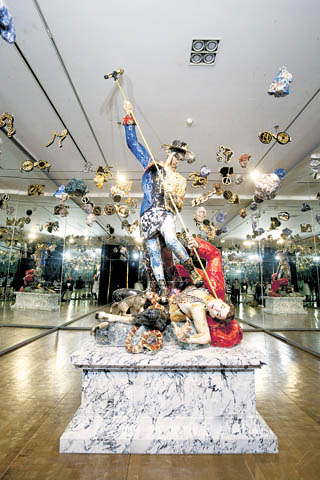 “Untitled G-Dragon” by Osang Gwon is a photographic sculpture based on a baroque sculpture and inspired by G-Dragon.[SEMA]

Last week, the school opened the K-Arts Convergence Creative Center in an attempt to educate students, who usually receive intensive training only in a specific field, in the diverse forms of arts and culture the university offers through its 26 departments in six schools.

University President Kim Bong-ryol said at a press conference marking his two-year anniversary as president that the university aims to “create cultural content that fits in this 21st-century global world.”

Chang Jae-ho, professor of music technology at the K-Arts School of Music as well as head of the new center, said that previous interaction among the schools was limited.

“The School of Music somewhat operates independently to the School of Dance, for example,” he said. “I don’t want to say that’s bad, but sometimes we need to allow students to cross over the boundaries of their own school and really learn about [different genres]. The center will act as the hub where that can happen.”

Jang added that the center, which is currently still a pilot project, will continue to listen to the needs of students.

“That’s in fact how this all started, I guess,” he said. “I know that some people say K-Arts is establishing the center because such convergence is one of the forms of art of the near future or because ‘convergence’ is the hot topic or something, but above all, we felt the need from the students.”

The new center will officially open next month.