Biometrics is big and evolving rapidly

Biometrics is big and evolving rapidly 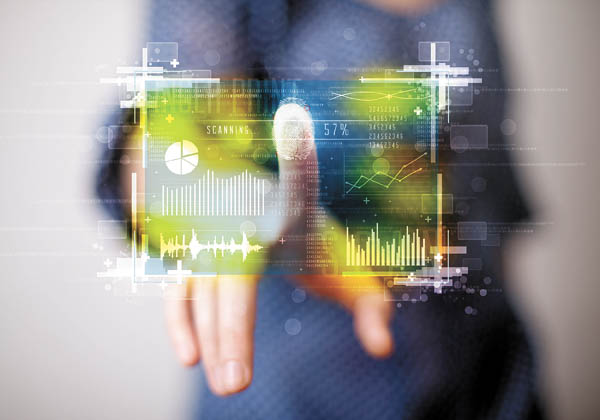 “Through the forum, we plan to establish a communication window to prevent Korea’s biometric authentication industries’ competitiveness from deteriorating due to lack of standard technology and cooperative ecosystem,” said the forum’s first chairman, Seoul National University Prof. Park Chun-shik in the opening remarks.

The launch of the forum comes at a time when interest in biometric technologies have been growing rapidly and such technologies are spreading into every corner of our lives, from authentication at an airport customs check to unlocking one’s smartphone. 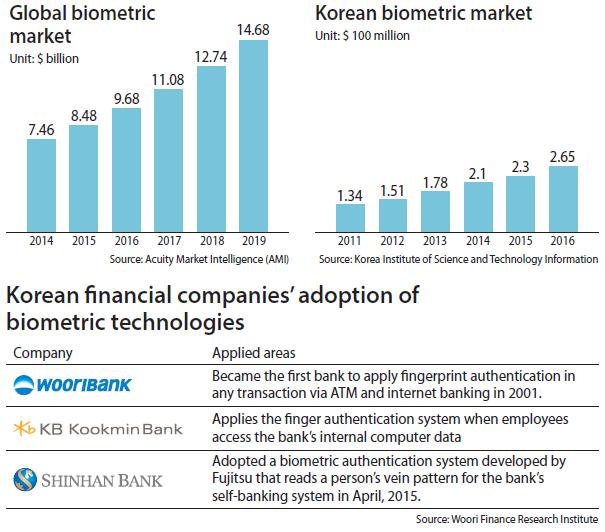 These technologies, which were previously limited to security use, are now expanding to other business sectors, including mobile communications, finance and even healthcare. One of the most active industries in the biometric technology field recently has been finance.

Experts note the increasing popularity of various wearable devices, including smartwatches, is further fueling the biometric industry, and Korea, with its cutting edge IT competitiveness, needs to foster the industry to grab a lead in the global market.

They say the key is to create a user experience (UX) that will not only provide convenience, but also build the credibility of the technology and allow customers to accept biometric technologies.

Market experts say that although the potential for biometric is limitless, and that it is guaranteed to bring about innovative changes throughout a variety of industries whether they be manufacturing or service industries, Korea is faced with many obstacles and challenges, including various regulations that limit the biometric industries, as well as the lack of a cooperative ecosystem between different industries.

New interest in the biometric industry has largely been the unexpected success of Samsung Pay, an electronic payment system through which users of Samsung Electronics smartphones pay for goods via their phone.

In just a month since the payment service was launched in Korea, the number of users who access Samsung Pay via the four premium Samsung smartphones - Galaxy S6, Galaxy S6 Edge, Galaxy Note 5 and Galaxy S6 Edge Plus - has already exceeded 600,000. The number of credit cards that are registered for the Samsung Pay service has reached 800,000 and payments made have exceeded 35 billion won ($30 million).

Samsung Pay is changing the paradigm of the financial industry, and its influence is expected to further expand in coming years.

“Currently, Samsung Pay is already installed in 14 percent of Samsung Electronics smartphones, but by next year, when the service is available also on the company’s medium and budget smartphones, including the Galaxy X and Galaxy E and J, it will be installed on a minimum of 30 percent of all Samsung smartphones and as much as 60 percent,” said Kim Dong-won, an analyst at Hyundai Securities.

As a result, LG Electronics is also said to be jumping into the mobile payment business and planning to launch its so-called G Pay service next month.

The success of Samsung Pay is largely due to the biometric technology on the smartphone.

Samsung Pay isn’t the first company to provide a mobile payment system. The difference is that in the past, a consumer had to go through a complicated process including a public key certificate that is accredited by an authentication institute such as a bank. Then, the user had to punch in passwords in order to make payments. These authentication processes also had security weaknesses and could lead to fraud and theft.

In contrast, the Samsung Pay process is simple: the user only has to place a finger to be scanned for authentication. The method is far more secure than previous methods.

“Until now, the most basic and popular self-authentication on the Internet has been typing in passwords, whether it’s for logging into one’s e-mail, a social network service, Internet community or so forth,” said Kim Jong-dae, a senior researcher at LG Economic Research Institute. “Even when using Internet banking, people had to use a security card, one-time password or mobile phone SMS authentication. And you still needed to input a password.

“There is a need for authentication methods that are convenient but at the same time provide exceptionally strong security, as the leak of such sensitive information could lead to huge losses,” he said.

The researcher says biometric authentication can play this role, as it is a technology that is hard to copy. It reads a person’s unique biological information.

According to a 2008 study by MITRE, the chances of a biometric technology failing to authenticate a person is low. The false acceptance rate for facial recognition was 0.35 percent. The rate for fingerprint and iris is much lower.

Korea isn’t the only country planning to utilize biometric technologies.

Among global smartphone manufacturers, Apple was not only the first to implement biometric technology in its smartphone but also launched the first mobile payment service, Apple Pay.

A biometric system was first adopted by Apple in 2013, a year before Samsung used it on its own smartphones. Additionally, Apple Pay was launched a year earlier as it went into service in October 2014.

Chinese IT company Alibaba is joining the global competition with the so-called Smile to Pay, which unlike Apple or Samsung uses facial recognition technology that was developed by a company affiliate. The technology in which a payment was authenticated via a selfie was demonstrated in March at the CeBIT trade show in Hannover, Germany.

The technology is not only used for financial transactions such as credit card payment. It is now expanding to other fields, including automatic medical examinations, in which a patient can get a medical examination without having to go to the hospital. It is also used in the public sector for getting administration documents from unmanned systems and accessing data on one’s welfare and pension records.

The global biometric market last year was $7.46 billion. The market is expected to enjoy an average annual growth of 14.5 percent and reach $14.7 billion by 2019.

The Korean biometric market in 2011 was $130 million. It is expected to enjoy similar annual growth of 14.6 percent to expand to $270 million by next year.

Analysts say the development of wearable devices will further fuel the uses of biometric technologies.

Samsung Electronics’ latest wearable smartwatch, the Gear S2, already includes the Samsung Pay service. However, unlike the smartphone version, the smartwatch can only be used on devices that access the NFC (near field communication) system and not the MST (magnetic secure transmission) system. Once the smartwatch device can be used on MST systems, Samsung Pay will be more widely used, as the user won’t have to extract a smartphone. He or she can make a payment by putting a wrist up to the payment device.

“Wearables are a perfect match to biometric technology, as they are physically attached to a person,” said Kim Jong-dae, an LG Economic Research Institute researcher. “As the wearable, healthcare and fintech market expand, the innovation and growth of biometric authentication will grow as well.”

“At the current stage, biometric technology doesn’t have a standard, and therefore, the cost that each company has to carry is huge,” said Kim Jong-hyun, a senior researcher at Woori Finance Institute.