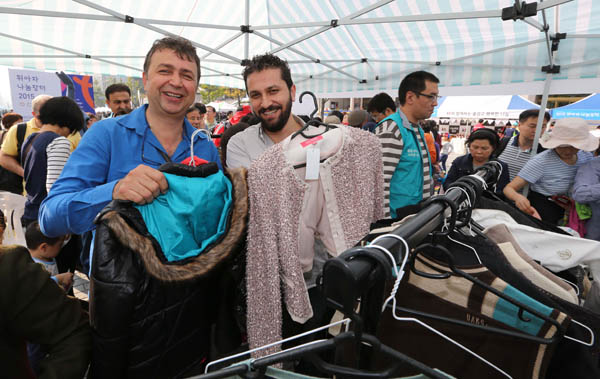 This year’s WeAJa flea market ran from 11 a.m. to 4 p.m. simultaneously in Gwanghwamun Square, central Seoul; in front of the Pororo Library in Busan Citizens Park; in Borame Park in Daejeon; and in the plaza in front of the North Jeolla Provincial Government Office in Jeonju.

Song Yi-ha, a 13-year-old home-schooler from Jongno District, central Seoul, visited the market at Gwanghwamun. She went home with a black cap worn by Exo member Suho, outbidding two other people in an auction with 130,000 won.

“My sole reason coming here was this,” beamed Song, tightly gripping the shopping bag containing her new hat. “I’m going to wear it myself. I’m a huge fan of Exo and my favorite member is Suho; I think he’s the most handsome.”

Canadian Iannick Collin, 26, bought jeans and slippers for her boyfriend. “They cost only 3,000 won in total, and he really likes them. I love flea markets because I like recycling old stuff.”

Another visitor to the Seoul flea market, Brian Satria Priyosa is an Indonesian university student who recently arrived in Korea to join the 2015 Busan Choral Festival & Competition. He said he was there with friends shopping for Korean traditional attire or hanbok.

“My friends bought hanbok, which only cost 5,000 won each,” the 22-year-old said. “I enjoy visiting flea markets in Jakarta as well. I’m really happy to be here and to know that the proceeds will be donated.”

In addition to the auction and flea market, the event included entertainment such as musical performances, cooking classes, face-painting, quizzes and crafts, and services like free health care consultations , with programs differing by city.

The Korea Association of Cardiopulmonary Resuscitation set up a booth at the Seoul WeAJa market and provided free CPR education to visitors.

WeAJa was initially launched in 2005 to celebrate the anniversary of the foundation of the JoongAng Media Network, the Korea JoongAng Daily’s parent company. All proceeds are donated to a philanthropic project called We Start, which operates We Start Villages, multipurpose care facilities, in areas with more than 200 children in low-income brackets.

The villages provide counseling, psychological and physical checkups, after-school study programs and nurseries, among other services. So far, they have supported some 67,000 children.