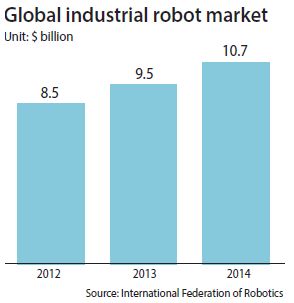 According to the Ministry of Trade, Industry and Energy on Monday, the ministry and Samsung decided to invest some 16.75 billion won ($14.89 million) over the next three years towards research and development projects that develop robot parts and software.

The ministry will begin its funding at the end of this year, while Samsung will provide technology consulting, quality check and marketability tests before commercialization. The nation’s largest electronics company will share market information with robot manufacturers about the specific robots that local manufacturers need.

“Samsung is one of the conglomerates that has a high demand for industrial robots and advanced robot technologies,” said Lee Heon-du, an official at the Industry Ministry. “The company used to produce industrial robots in the past and is known to be developing in-house robots, as significant numbers of its production lines are already automated.”

The project will develop key parts of industrial robots that produce and assemble small gadgets like smartphones, tablet PCs, cameras and other small IT accessories and home appliances.

The government is trying to pull down the price by 30 percent in order to widen small and midsize manufacturers’ access to robots and transform their factories into so-called smart factories, and eventually boost their products’ competitiveness by reducing personnel costs.

So far, industrial robots have mostly been used in automobile, semiconductor and display factories worldwide, mostly in welding, loading and parts assembly processes. Recently, the need for robots is on rise in metal, plastic, chemical and food and drinks manufacturing processes.

However, mobile phone and home appliance factories in China and Southeast Asia still rely on humans when it comes to precision assembly of small parts because robots are generally not good at precision work.

“Key parts of these industrial robots, like decelerators, motors, controllers and encoders are so expensive that their prices account for more than half of the robot’s price,” Lee said. “If these parts get cheaper, Korean industrial robots could gain price competitiveness against foreign industrial robotics leaders like Japan’s Yaskawa and ABB of Switzerland.”