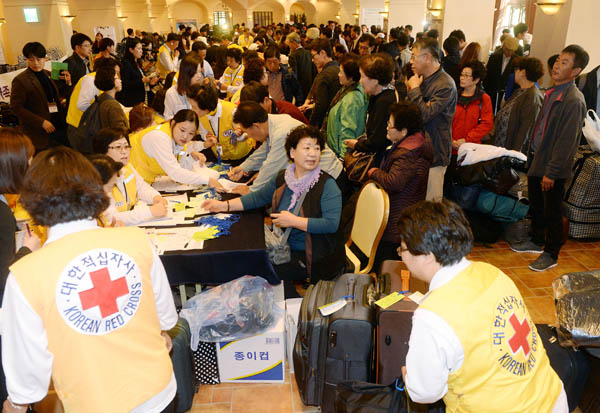 One day ahead of the three-day inter-Korean family reunions to be held in Mount Kumgang, hundreds of South Korean participants register at the Hanhwa Resort in Sokcho, Gangwon, Monday. [NEWSIS]

Some 400 South Koreans are set to embark to North Korea today to be reunited with family members they haven’t seen since the Korean War, accompanied by more medics and ambulances than in past reunions.

The inter-Korean family reunions, in their 20th round, are being resumed for the first time in 21 months.

But Yim is worried how she will relate some sad news to her younger sister during the reunions at Mount Kumgang on Tuesday.

“My younger sister asked about our younger brother, but I don’t know how to pass on the news that he died in a traffic accident,” she says with a sigh.

Yim was among a group of 394 Koreans from 96 families gathered at Sokcho in Gangwon on Monday to head to Mount Kumgang for a three-day trip, the first round of reunions.

The second round will be held between Saturday and Monday and bring over 250 South Koreans from 90 families. The families were selected by lottery by the Red Cross.

Some 650 North and South Korean family members will be brought together in the two rounds.

Taking into consideration the advanced age of the participants, the government increased the number of medics accompanying the delegation from 15 in the past to 20 and also sent five ambulances compared to four. Some 40 wheelchairs have been prepared for the elderly.

Upon arriving in Sokcho, this first batch of South Koreans handed over to supervisors bags filled with gifts for their North Korean relatives and also received training on the proper conduct while in the North.

They prepared all sorts of gifts, often specialties of their hometowns. Someone from Sangju in North Gyeongsang, for example, brought dried persimmons.

The South Korean delegation will depart from Sokcho at 8:30 a.m. today. After arriving at Mount Kumgnang, the first batch of families will gather together for two hours in the afternoon before heading to a dinner hosted by the South Korean government.

On the second day, they will have two hours in the morning to spend quality time with their family members at their lodgings before heading together to lunch.

At 4:30 p.m. they will gather together again. On Thursday, they will have two hours before they have to bid farewell and head South.