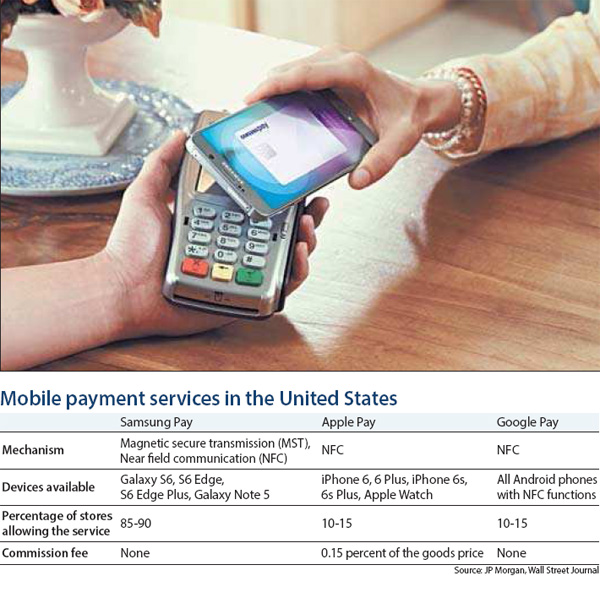 An office worker produces his smartphone with the image of a credit card on the screen to the cashier in a restaurant near Gangnam Station.

The clerk takes the phone and scans it at the payment machine. In a second, there’s a beep and a receipt is printed out.

“The customers and I were amazed at Samsung Pay at first,” said the clerk. “I don’t feel awkward any longer because there are so many people using it now.”

The transaction is a small illustration of the growing acceptance and use of Samsung Pay in the city.

This week, the number of domestic subscribers to the mobile payment service is set to surpass 1 million. Given that the service was only launched on Aug. 20, it has attracted an average of 16,600 new users every day.

What makes the growth more noteworthy is that the service is only available on Samsung’s latest smartphones, which are less than eight months old - the Galaxy S6, S6 Edge, both released in March, and S6 Edge Plus and Galaxy Note 5, which went on sale in August. Users of the two previous models can use Samsung Pay through a software upgrade.

Underlying the rapid rise of the mobile payment service, according to Samsung, is the system’s versatility. Samsung Pay works with almost all point-of-sale systems, including near field communication (NFC), magnetic secure transmission (MST) as well as Europay, MasterCard and Visa terminals for chip-based cards.

The wide variety of acceptable systems was made possible after Samsung spent 200 billion won ($162 million) in February to acquire LoopPay, a U.S. mobile payment start-up that owned patents in MST technology.

Insiders say it took just three months for Samsung to seal the deal with LoopPay. “We could have lowered the price if we negotiated over time,” said a Samsung executive who was involved in the deal. “But we thought the competitive edge we could gain from rapid acquisition of the technology was more important.”

Although Samsung produces its own smartphones, profits from its users consuming content through Google Play go to Google, which owns and develops the Android operating system. Apple, Samsung’s smartphone rival, also gathers sizable income from its own App store.

As the smartphone market nears saturation point, Samsung is in danger of falling behind if it fails to build and solidify its own software position.

Samsung Pay is considered part of the solution. Although both Apple and Google also have their own mobile payment system, the leadership position remains unclear. Should Samsung Pay continue its momentum, the company believes it can expand further into the software and content business.

“When China is rapidly catching up, Samsung is faced with limited growth driven by hardware technologies,” said In Hoh, professor of computer engineering at Korea University. “Samsung Pay’s success is meaningful in that Samsung has finally showed it could excel with its software too.”

He said Samsung’s service platform will enable it to survive even after the smartphone era has ended.

However, the company faces hurdles. Samsung Pay does not work at stores run by Shinsegae, a major retailer, such as E-Mart, Shinsegae Department Store and Starbucks, largely because Shinsegae also operates its own mobile payment system called SSG.

The Samsung payment system being limited to only four smartphone models is another drawback.

The company says it is gearing up for a large-scale evolution of the system which will allow Samsung Pay to be used on public transportation and to withdraw cash from ATMs.