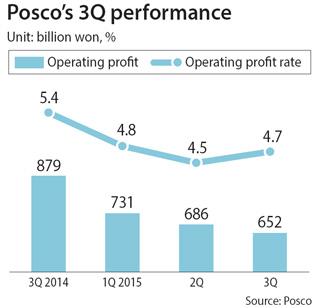 Posco saw a net loss in the third quarter of 658 billion won ($582 million) due to temporary losses from non-business related areas, such as foreign exchange fluctuations and paying compensation for lawsuits.

The nation’s largest steelmaker reported relatively good performance for the past three months in its business operation, thanks to cost cutting and restructuring efforts, the company said. But it acknowledged that its huge third-quarter loss may lead the company to end this year with net loss of up to 300 billion won.

When compared with the second quarter, sales only dropped by 7.9 percent and the operating slipped 5 percent.

The rate of operating profit per sales grew over the past three months, to 4.7 percent, compared to 4.5 percent in the second quarter of this year.

The company saw a net loss of 658 billion won during the third quarter, mainly from extra non-operation related spending of about 1 trillion won. In the past three months, it paid about 290 billion won to pay the negotiation compensation fee in an international lawsuit with the Nippon Steel & Sumitomo Metal Corporation.

It also lost about 380 billion won from foreign exchange at its overseas-based business units, and lost another 149 billion won from the plunging currency value of emerging nations Posco has been working with. The company also suffered damage of about 388 billion won following the devaluation of mines and stocks overseas.

Due to the huge losses on non-steel business matters during the third-quarter, Posco may face a yearly net loss for 2015 of up to 300 billion won.