Battery makers get a charge out of China

Battery makers get a charge out of China 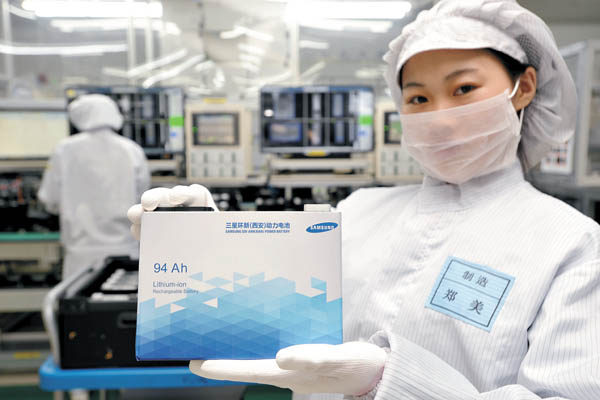 A Samsung SDI employee at the company’s plant in China holds up a lithium battery package. [SAMSUNG SDI]

China’s move to install electric car-charging stations nationwide has left battery makers around the world scrambling to take advantage of the market.

One of the fastest-moving players has been Samsung SDI, which just completed an electric car battery factory in China.

A ceremony to celebrate the construction was held at the site on Thursday, attracting CEO Cho Nam-seong of Samsung SDI and executives of the manufacturer’s partners.

Located in the city of Xi’an, the factory can produce batteries for some 150,000 plug-in hybrid electric vehicles (EV) or 40,000 conventional EVs per year. Samsung SDI declined to reveal the exact figure in terms of kilowatt-hours, since there is a possibility of change in the upcoming months. 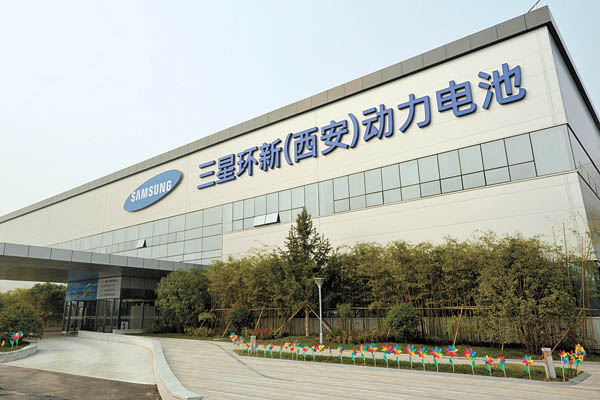 The factory began operating in September and will cover the battery supplies for partners that include BMW and Chinese automakers Yutong and Foton. Even though its partners are spread across the world, the sheer size and demand of the Chinese market led Samsung to seek a base in the country.

The company will go on to invest an additional $600 million by 2020 in a bid to boost production and fulfill a sales target of $1 billion that year.

The CEO expressed optimistic prospects for the new factory.

“China accounts for 40 percent of global demand for electric cars,” Cho said. “In this regard, Samsung SDI hopes to become a leading player in the market.”

Cho also touted the city of Xi’an as the right place to house the complex.

“Xi’an is a key place for China’s economic development initiative, ‘One Belt, One Road,’” he said, “We will develop the plant into a global hub of EV battery manufacturing, going hand-in-hand with the development plan.”

The initiative is aimed at boosting development along the ancient “silk road” trading routes between China and Europe, and Xi’an has been selected as the starting point of the so-called Silk Road Economic Belt.

Despite the rosy prospects painted by the company, analysts have mixed views on the electric vehicle industry.

Skeptics worry that the limited availability of charging stations will ultimately hold back EVs from becoming alternatives to conventional cars.

Some analysts have also pointed out that battery suppliers are so numerous that competition within the market will be cutthroat.

But the Chinese government’s announcement to support electric car-charging stations in October boosted the morale of battery suppliers.

China said it will build a nationwide charging station network to serve the power demands of five million electric vehicles by 2020.

China sees that speeding up the construction of a nationwide charging network will help achieve its goal of reducing pollution by boosting the appeal of electric cars.

The company announced Wednesday that it will supply nearly all of the powertrain parts and other components for its long-range Chevrolet Bolt.

LG Chem forged a partnership with Volkswagen AG’s Audi division, Daimler AG, Ford Motor and other automakers. LG formed a vehicle components group two years ago and is also making the other parts.