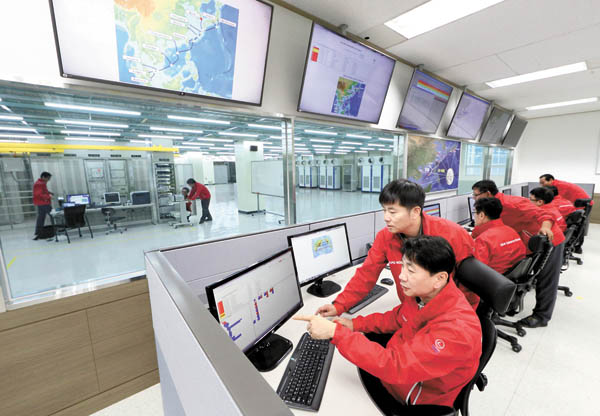 KT workers check on the undersea cable networks managed by the company at the control center in Songjeong Beach, Busan. [KT]

Telecommunications provider KT will take charge of an undersea communications cable network run by a consortium of telecom companies from around the world, KT said on Thursday.

The network called New Cross Pacific (NCP) is capable of carrying telecommunication signals across vast stretches of the ocean and allows for faster communication between distant countries.

KT will operate the so-called Network Operation Center near Songjeong Beach, Busan, which will manage the system.

The network covers a sprawling area, spanning more than 13,000 kilometers (8,000 miles) in length.

NCP will link Busan with cities in the United States, China, Japan and Taiwan. When completed in 2017, the system will be able to deliver up to 118.4 terabits per second.

KT sees its role in managing the system as an important task in global data exchange, as 99 percent of international data is transmitted by undersea cables.

The rest is offered by satellites, which lack stability in data transmission compared to cables.

The network is also still under construction and expected to be operational early next year.

APG is expected to extend across the Pacific Ocean to the United States, stretching 11,000 kilometers across nine countries.