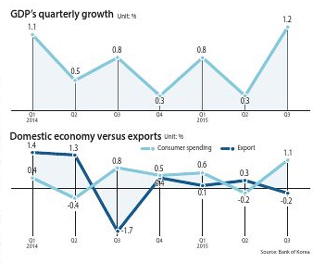 The economy in the third quarter saw the sharpest growth in more than five years due to improvements in the domestic market, including consumer spending and the construction market.

However, exports, a crucial pillar of Korea’s economy, continued to struggle.

Korea’s GDP in the July-September period grew 1.2 percent compared to the first three months of the year, according to the Bank of Korea (BOK) on Friday. When compared to a year ago, the economy expanded 2.6 percent.

This is the first time that the economy has reported growth of more than 1 percent since the first quarter of 2014 when it grew 1.1 percent compared to the last three months of 2013.

Economic growth has remained below 1 percent since the second quarter of 2014, which was heavily impacted by the Sewol ferry tragedy that killed 300 passengers, mostly high school students on a spring trip to Jeju Island.

But most noticeable is that third quarter quarterly growth saw the sharpest expansion the Korean economy has seen since the second quarter of 2010, when it grew 1.7 percent.

The turnaround from the 0.3 percent growth in the second quarter to expand more than 1 percent was largely attributed to improvement in the domestic market.

“The fear over Middle East respiratory syndrome (MERS) has stabilized and government policies, such as lowering the special consumption tax and Black Friday, further helped the recovery of spending in the private sector,” Lee said.

Consumer spending saw a 1.1 percent increase compared to the second quarter. This is a sharp turnaround from the 0.2 percent quarterly decline reported in the second quarter largely due to the fear spread by MERs.

Government spending also helped the recovery of the domestic market as it grew 1.9 percent, twice the second quarter growth of 0.8 percent. The impact of MERS was especially visible
in the improvement of the service
industry.

“In the third quarter the negative influences caused by MERS have subsided,” said Jeon Seung-cheol, director general of economic statistics department at the central bank. “The service industry including retail and wholesale, lodging, health and welfare and logistics that were affected by MERS grew.”

As a result the construction industry expanded nearly 8 percent, a sharp expansion from 0 percent in the second quarter and a turnaround from the first quarter when it declined 3.5 percent.

Although the economy in the third quarter saw an improvement, it needs to register a 0.9 percent growth in the fourth quarter in order to achieve the 2.7 percent growth target set by the central bank. The Bank of Korea earlier this month revised its outlook for this year’s growth from 2.8 percent set in July to 2.7 percent.

“Major export products such as LCDs, petrochemicals and shipbuilding are slowing down,” said BOK official Jeon. “As the external conditions are unfavorable, it is difficult to expect a substantial improvement [in exports] in the fourth quarter.”

BOK Governor Lee also raised concerns about the global economy and its potential impact on the Korean economic recovery during a joint conference hosted by the central bank and Yonsei University on Friday.

“The global financial market is showing frequent insecurity due to the G-2 (China and U.S.) risk and uncertainty regarding the direction of global growth,” said the BOK governor. He said anxiety over the U.S. interest rate hike and the slowing Chinese economy could result in instability of financial markets in emerging markets including Korea and affect economic recovery.

“We’re in a situation where we have to rely on the domestic economy as exports will likely continue to struggle,” said Lim Hee-jung, a senior researcher at Hyundai Research Institute. “But it won’t be easy to achieve
a 0.9 percent growth in the fourth quarter.”