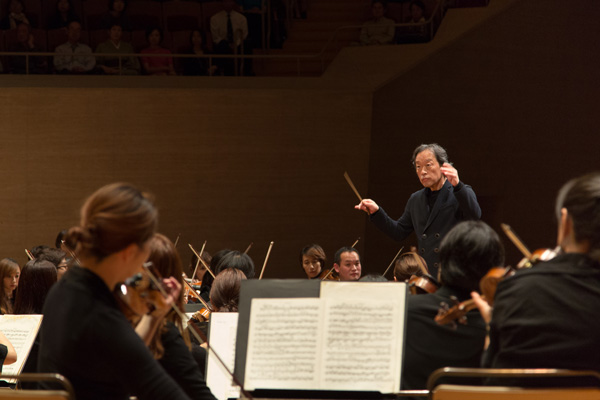 Maestro Chung Myung-whun, the current leader of the Seoul Philharmonic Orchestra, impressed Japanese audiences this week with his musical talents, not just on the conductor’s stand but also on the piano.

“The essence of music lies in balance and harmony,” he said. “Through this concert, I believe we can transcend our geographical and cultural differences and achieve harmony between Korea and Japan.”

In March, Suntory Hall invited Chung and the orchestra to perform as part of a special concert series commemorating the 50th anniversary of diplomatic relations between Korea and Japan.

The maestro said he accepted the invitation in an effort to “stabilize through music the relationship between the two countries, which has grown distant.”

On Monday, the Seoul Philharmonic Orchestra performed Brahms “Double Concerto for Violin and Cello in a minor, Op. 102” and Brahms’ “Symphony No. 4 in e minor, Op. 98” under Chung’s baton. The program ended with a standing ovation.

“For Brahms’ Symphony No. 4, the performance from the string section, especially, was on an entirely different level that I’ve ever experienced,” Japanese music critic Takuya Katagiri said after the concert.

Chung added that the show at Suntory Hall was a valuable experience for him and his musicians “to witness the great achievements the Seoul Philharmonic Orchestra has made over the past 10 years. I’m so thankful to the musicians for showing such endless fellowship and passion.”